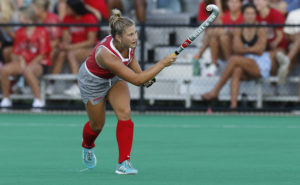 Ohio State women’s field hockey started the week with a 1-0 win over Miami in the Buckeye Invitational at Buckeye Varsity Field.

The Buckeyes broke the scoreless tie five minutes into the fourth quarter when Leanne Bough fired a shot into the back of the Miami net for her second goal of the season. Ohio State held the lead for the remaining 10 minutes of the game.

Ohio State claimed its second win of the week against No.14 Wake Forest after scoring two timely goals in the second and third quarters. Despite the Demon Deacons outshooting (21-8) and out cornering (9-3) the Buckeyes, Ohio State notched a 2-1 victory at home.

Senior goalie Aaliyah Hernandez repeatedly kept Wake Forest out of the net, finishing the afternoon with a season-high 10 saves, including five in the fourth quarter.

In its final game of the week, Ohio State defeated Appalachian State 2-0 and extended its winning streak to four games.

The Buckeyes (5-1) dominated the game behind another strong performance from Bough. She led an attack that generated 19 shots, with 13 on target. The Whitney Point, N.Y. native, scored both goals from a penalty and another from inside the Appalachian State box.

Ohio State women’s volleyball remained undefeated after winning all three games at the VCU Invitational in the Siegel Center in Richmond, Va.

On Friday, the Buckeyes started the weekend with a sweep (25-17, 25-22, 25-14) against James Madison. The teams were deadlocked for most of the first half of set one before the Dukes called a timeout. Ohio State gained momentum and never looked back out of the break, winning the set and then the match.

Outside hitter Gabby Gonzales led the team to the win, racking up a season-high 16 kills and contributing to an over .300 hitting percentage in the match. Arica Davis added four blocks — a total she has reached in every game this season.

Ohio State dominated Virginia in its last match to improve to 8-0.

The Buckeyes swept the Cavaliers in straight sets (25-16, 25-17, 25-18) and wrapped up the road trip with its sixth sweep of the regular season. Gonzales reached the 10-kill plateau for the fourth-straight match and the sixth time this season. Ohio State’s defense forced the Cavaliers to hit in the red (-.030) with seven kills and eight errors on 33 attacks.

Ohio State men’s golf completed play at the Marquette Intercollegiate on Tuesday at Erin Hills, posting a final score of 295 to finish 12th in the tournament.

JonErik Alford and Maxwell Moldovan each finished at 1-under par for the 54 holes. It was Alford’s first under-par tournament of his Ohio State career and Moldovan’s fifth under-par event as a Buckeye. The pair tied for 34th in the event.

Patrick Schmucking finished the tournament at even-par 216. He followed his 3-under performance in his final collegiate round with a 1-over 73 on Tuesday.

The Buckeyes are in action at the Maridoe Invitational at Maridoe Golf Club in Dallas, Texas currently. The Golf Channel will provide coverage of the event.

Ohio State men’s soccer suffered a setback at No. 5 West Virginia, losing the match 1-0 after falling behind early.

The Buckeyes allowed Mountaineers’ midfielder Kevin Morris to score just over two minutes into the game. Ohio State held West Virginia scoreless for the remainder of the game but failed to capitalize on its opportunities to tie it at 1-all.

This season, Ohio State has been involved in four one-goal games, including a double-overtime 1-all draw. In addition, the Buckeyes had scored the first goal in four games before it competed with the Mountaineers.

This week, the Buckeyes return home for a four-game homestand starting with No. 16 Akron on Sept. 15 at Jesse Owens Stadium.

Ohio State women’s soccer started its week with a 2-0 shutout of Dayton. The Buckeyes’ aggressive defense and quick-striking offense allowed them to top the Flyers.

In its next game, Ohio State fell 4-1 to No. 6 TCU. The Buckeyes went toe-to-toe with the Horned Frogs but missed several scoring opportunities. Emaly Vatne provided Ohio State’s only goal of the game from a right-footed shot that hit into the side of the next.

However, Vatne’s goal was too little too late, and TCU put its foot on the gas to come away with the 4-1 win.

Ohio State completed its non-conference action with the game against TCU and will play in the Big Ten the rest of the year. The Buckeyes will have their first conference match on Sept. 19 in Maryland.