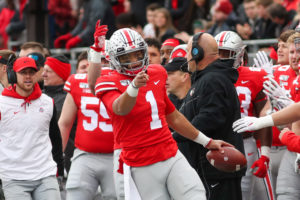 Defensive end Chase Young is a finalist for two separate awards, while Justin Fields, J.K. Dobbins and Jeff Okudah each are a top-three finalist for positional awards.

Young made the top three for the Maxwell Award, which is given to the best college player of the year at any position, and is joined by a pair of quarterbacks in Oklahoma’s Jalen Hurts and LSU’s Joe Burrow, who transferred to the Tigers from Ohio State.

Four out of the past five Maxwell winners went on to also win the Heisman trophy.

Young is also up for the Chuck Bednarik award for the best defensive college player in the country. He is up against Auburn defensive tackle Derrick Brown and Clemson linebacker Isaiah Simmons.

Young’s 16 1/2 sacks leads the group, even with the junior end only playing in nine games, but Simmons has six sacks of his own to go with 74 tackles and 12 tackles for loss. Brown has 43 tackles, nine for loss and four sacks this season.

Burrow and Hurts are also going up against Fields, this time for the Davey O’Brien Award that honors the best quarterback.

Burrow (4,014 passing, 239 rushing) and Hurts (3,184 passing, 1,156 rushing) have significantly more total yards than Fields (2,352 passing, 445 rushing), but Fields’ 43 total touchdowns is right there with Burrow’s 44 and Hurts’ 47, and the Ohio State sophomore quarterback has done it with only one interception compared to Hurts’ and Burrow’s six apiece.

Dobbins is going up against Wisconsin’s Jonathan Taylor and Oklahoma State back Chuba Hubbard for the Doak Walker award honoring the nation’s best collegiate running back.

The yards-per-carry numbers between the three backs are all with 0.17 yards, and Hubbard leads the group with 20 rushing touchdowns, while Taylor has 18 and Dobbins has 15.

Finally, Okudah is up for the Paycom Jim Thorpe Award against Grant Delpit from LSU and J.R. Reed from Georgia for the award that honors the best defensive back.

Ohio State is the only team in the country with four finalists.