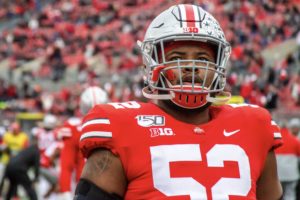 “The first thing was disbelief,” Davis said. “To receive that type of award is – I’m lost for words. I was so excited when I got the news and I just want to say thank you to everyone that voted for me on that ballot. I still have got to finish strong, but it’s definitely something nice to look back on.

“It just gives me the chills thinking about it. For me, now, it sets the ceiling for this upcoming season a lot higher, and I’ve got to go out and perform. I just think a lot of it has to do with the culture at Ohio State. I’ve had great leaders in front of me, and I just try to follow in their footsteps and keep my head into the grind, and all the good stuff will come.

“It’s honestly such an honor to be a part of the Big Ten and to be at a place like Ohio State and get to go against the other schools in our conference – it’s high-level competition and there’s nothing like it.”

Davis, whose grandfather Willie Davis, an NFL Hall of Famer, recently passed away. The Buckeye guard immediately shouted out his grandfather following the announcement.

“Love you Grandad I know you are watching me I hope this can make you smile up above!” Davis wrote.

Love you Grandad I know you are watching me I hope this can make you smile up above!❤️ https://t.co/2MzDDSoBKg

Willie Davis clearly had a large influence on his grandson, Wyatt, who emerged as one of the  best offensive linemen in the nation as a third-year sophomore in 2019.

“He influenced me a lot,” Wyatt Davis said of his grandfather. “And I was very fortunate to have leaders like him, my father and my brother and my mom in my life because they’ve all worked hard for everything that they’ve done.

“But especially my grandfather, the kind of circumstances that he was given, he didn’t use that as an excuse, he used it to excel. And he did it on the football field as well as off. His life, in general, if I could somewhat mimic the type of accomplishments that he’s made, I think that I will definitely be set off pretty well and be very happy with my career playing football.

“He’s always motivated me to go hard, and obviously, it was very tough losing him recently because he would always watch all my games, even at Ohio State. So not having him there is definitely going to be hard, and that’s why this season I’m going to be dedicating it to him.

“He grew up in Texarkana Arkansas, and he grew up there in a time where the civil rights movement for black people was very real. He ended up having to go to Grambling just because all the top power schools during that time weren’t offering black athletes.

“It’s actually kind of funny, his mom hated football, so he used to sneak and play when he was younger and grew a love for the game and ended up going on to Grambling and being coached by an unbelievable coach, Coach Robinson. His luck with coaches has been unreal, he’s been apart of legendary coaching staffs.

“So he took a lot from his time at Grambling and then it transferred over to the NFL where he first got drafted by the Browns and then got traded to the Packers, then the rest is kind of history. After that point, he excelled, won Super Bowls and really has that career that i feel like every football player wants.”

An excellent run blocker, Wyatt Davis helped guide the fifth-best rushing attack in the country (266.8 rushing yards per game), which was a great improvement from 2018 when the Buckeyes’ ranked No. 63 in rushing at 171.3 yards per game.

The Bellflower (Calif.) St. John Bosco product was named a second-team All-American by the Walter Camp Football Foundation and a first-team All-American by multiple outlets, helping pave the way for the nation’s No. 3 scoring offense, which averaged 46.9 points per game.

Now a fourth-year junior, Wyatt Davis returns for his second season as a full-time starter with high expectations after blocking for the nation’s No. 4 offense in terms of yardage (529.9 yards per game) last season.

With a lot of hype entering his junior season, Wyatt Davis was named a preseason first-team All-American by the Walter Camp Foundation and Sporting News.

Beyond Wyatt Davis, a former teammate of his in Price was also deserving of Big Ten recognition as a two-time All-American and Rimington Trophy winner.

“It’s a tremendous honor.,” Price said. “You’ve got to think about the guys who have come through the Big Ten over the past decade and some of those names and the history in the Big Ten for offensive linemen, it’s incredible. To be selected is a huge honor.”

“You finish up your junior year and everything was healthy.,” Price said. “All you had to do was stay healthy, and I know that’s a novelty playing the game of football but it gives a lot of credit to the strength and conditioning staff at Ohio State and the medical team.”

Perhaps Price’s most impressive feat was starting at guard as a true freshman on the national championship team in 2014.

“Incredible opportunity,” Price said. “You go from your freshman year playing in Ohio Stadium, and from where I am from, 1,000 people in the stands is a lot of people to 105,000 people on any given Saturday, and then go to Jerry’s World and you just see the beautiful stadium, tons of energy in the atmosphere.

When asked to elaborate on his last remark, Price kept it short and sweet.

“We always said the guys who won the game out of Alabama and us was going to be the national championship winner.”

After transitioning from guard to center, Price won the Rimington Trophy as the nation’s top center as a senior and also earned the Rimington-Pace Big Ten Offensive Lineman of the Year that season.

Following his standout career in Columbus, Price suffered a torn pectoral while attempting a bench press at the NFL Combine in 2018. Despite needing surgery to repair the tear, the Austintown (Ohio) Finch product was selected by the Bengals with the No. 21 overall pick. In 2018, Price was named to the Pro Football Writers Association All-Rookie Team.