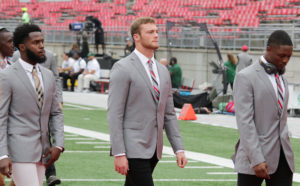 Ohio State sophomore linebacker Pete Werner is in his first season as a starter, but he’s already drawing a lot of attention from coaches – and not only the coaches in Columbus.

On Saturday, Minnesota and head coach P.J. Fleck are scheduled to travel to Columbus for a noon kickoff against No. 3 Ohio State. Fleck, speaking on the Big Ten teleconference on Tuesday, singled Werner out for praise, calling him an instinctual linebacker who excels at tackling in space.

That’s high praise for a player who saw only spot duty on defense last season while contributing some on special teams. He won a starting spot alongside Malik Harrison as one of Ohio State’s outside linebackers this year, though, and he’s been a bright spot on a sometimes-struggling Buckeye defense.

Through six games, Werner (6-3, 236) is seventh on the team with 18 total tackles to go with three tackles for loss and two sacks. He also has three pass breakups, a quarterback hurry and forced fumble – which was recovered for a touchdown by Nick Bosa in the season opener against Oregon State. The Indianapolis Cathedral product signed as a four-star prospect in Ohio State’s 2017 class. He played in 11 games last season, racking up nine total tackles.

Now, less than two years after arriving on campus, Werner is a key player for the Big Ten favorites, drawing attention from opposing coaches like Fleck. Of course, he’s earned some praise from Urban Meyer and Co. as well.

That’s all high praise, but that could be expected from a head coach talking about one of his rising stars. The praise from Fleck is something different, and Werner said it was a “great feeling” to be noticed by an opposing coach.

“I respect the guy, he’s a great coach,” Werner said. “What he did at Western Michigan was great. It’s an awesome feeling being recognized, but then again we still have a job to do to take care of, but as far as what he said about me – it’s very nice of him,  I respect him a lot.”

From his standpoint, Werner said he feels he’s taken a big step forward after learning from the bench last season.