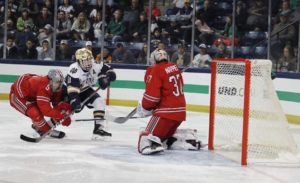 Laczynski was named to the Preseason All-Big Ten First Team, while Nappier earned a spot on the second team.

Lacyznski returns for his final season with the Buckeyes with 109 points in his collegiate career, the second most in the NCAA among leading scores. And within those top scorers, no one in the top 10 can match his career 1.07 points per game.

Nappier also impresses at a nationwide level, coming into his third season No. 2 in the NCAA with a save percentage of 93.8. He was a First Team All-Big Ten member and Big Ten Goalie of the Year in 2018-19, even while splitting starts with then-redshirt senior goalie Sean Romeo.

The No. 12 Buckeyes start their season next weekend on Oct. 11 against No. 14 Western Michigan.