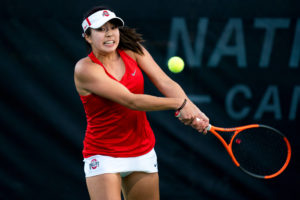 Shiori Fukuda – a fourth-year junior on the Ohio State women’s tennis team, was named the Big Ten Athlete of the Year

A two-time Big Ten Athlete of the Week in 2020, Fukuda posted a 9-3 record in dual matches, all on court one. She recorded a 24-7 overall mark, leading Ohio State in wins in both categories.

The Meguro, Tokyo, Hinode High School product also became the fifth Buckeye to earn three First Team All-Big Ten laurels and the fourth to be honored each of her first three seasons, having been a unanimous All-Big Ten choice each time. Ohio State’s four-time honorees include Dascoli (1998-01), Gabriella De Santis (2014-17) and Anna Sanford (2015-18), while Miho Kowase (2014, ’16-17) and Monica Rincon (2000-02) were both named first-team All Big Ten thrice.

Earlier in the spring of 2020, Fukuda was named an ITA All-American. She ended the year ranked No. 11 in the ITA rankings, which marked the highest spot for a Big Ten player in the final 2020 rankings. Fukuda ascended from No. 79 in the 2019-20 preseason rankings to a then-career best No. 11 at the end of the fall. She then climbed to a career-high mark of No. 8 in February before finishing back at No. 11.

During her dominant fall, Fukuda was runner-up in singles play at the USTA Fall Ranked Spotlight and a finalist in both singles and doubles at the ITA Midwest Regionals. Additionally, she advanced to the doubles final and made it to the singles quarterfinals at an ITF $15K in Lubbock, Texas.