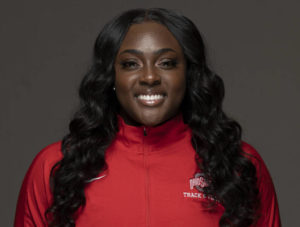 Every year, each Big Ten institution nominates one male and one female student, with a scholarship awarded to each winner for achievements in academics, athletics, extracurricular activities and leadership.

In recognition of the Big Ten’s leadership in fully integrating athletics into the academic mission of its member institutions, the Indianapolis Big Ten Community Partnership initiated the Wayne Duke Postgraduate Award in 2008. Over the past 13 years, the award has contributed nearly $170,000 in scholarships.

“Wayne Duke made an incredible impact on the Big Ten during his life,” said Jerry Semler, chair of Wayne Duke Award Selection Committee. “In the same sense, these student-athletes have made tremendous contributions to their universities and the Big Ten. Their commitment to excellence in the classroom, in their community and in their athletic careers is truly inspiring.”

“She’s very, unusually powerful,” Olayote’s throwing coach Ashley Muffet, who was a four-time All-American, said. “I’ve trained with Olympians. I’ve seen the top of the top. And I know that she’s different and she’s very special.”

Olatoye is the NCAA national champion in the weight throw, as well as one of the top-three weight throwers in NCAA history. She has also competed for Team USA at the U-20 World Championships and on the Nigerian Senior National Team.

Beyond her incredible athletic achievements, Olatoye is a health and rehabilitation major with a minor in Spanish. She holds a 3.63 grade point average and plans to compete in the 2020 Tokyo Olympics for Nigeria. After competing as a professional athlete, she plans to attend graduate or medical school to become an orthopedic physician.

“She’s well-rounded, she has a lot going for her and so I think that she’s kind of come to the point where she knows that she has to live up to the expectations that she set for herself,” Muffet told Buckeye Sports Bulletin. “So I think that’s one of the things that makes her pretty special.

In addition to her achievements in the classroom and on the field, Olatoye has shadowed pediatric physicians and volunteered her time assisting in a surgical intensive care unit. Furthermore, she has volunteered at MLK Day- Pay It Forward, Girls on the Run, and at high school track and field meets. She is currently a student-athlete peer educator, SHEROS community outreach chair, and a sexual violence prevention leader at Ohio State.

Olatoye has traveled around the world and enjoyed a wealth of experiences as a track and field standout, but her career started as just another way to compete after school in the spring.

Sade said she signed up for sports to have after-school activities to do so her parents could pick her up after work. She excelled at volleyball and basketball, but when spring came around it was time to find another sport.

“I just did track because it was a spring sport and I was like, ‘Alright I at least have to be competing in some sport every season,’” Olatoye told BSB.

Olatoye and Piper will be recognized in Indianapolis during the Big Ten Men’s Basketball Tournament on Saturday, March 14.

“Indiana Sports Corp is humbled to have the opportunity to present the Wayne Duke Scholarship to these outstanding student-athletes,” said Ryan Vaughn, Indiana Sports Corp president. “Both of the honorees have demonstrated impressive academic and athletic performance and serve as role models for the youth in their communities.”

The Wayne Duke Postgraduate Award is named for the late Big Ten Conference commissioner who served from 1971 to 1989. While leading the Big Ten, Duke spent much of his time working to improve academic standards and graduation rates for students competing in conference athletics.

The award is made possible by donations from local corporations and individuals supporting intercollegiate athletics. The Indianapolis Big Ten Community Partnership is comprised of the State of Indiana, City of Indianapolis, Indiana Sports Corp, Pacers Sports & Entertainment, and Visit Indy.