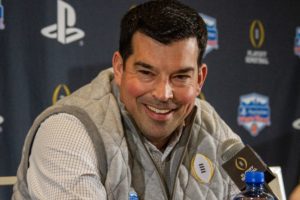 Dabo Swinney: Ditto from everything I said yesterday. We’ve had a good week. Our guys have been great at practice. The hospitality has been great. Both teams like each other, play for each other and enjoy playing with their teammates.

Ryan Day: This has been a really great week for our guys. Great week of practice. Hospitality has been great. It’s an honor to play against Clemson.

RD: At this time of the year, coming off those three games at the end of the year, it’s great to catch our breath and have everyone healthy. Once that Penn State game hit, it was March Madness.

Should Heisman voting should be moved to after all games are played?

RD: The whole script hasn’t been written yet. In games like this, it’s about players, not plays. And these games are the biggest stage, where the best players will need to step up in the spotlight.

DS: I wouldn’t say we changed our identity. We’re still true to who we are at our core. Every year you have to evaluate and put your team in the best situation to win. Our back seven was our strength, maybe the best we’ve ever had. Our D-line had very little experience, so it took time to develop. Changing defenses has made us more difficult to prepare for.

DS: The best is yet to come. That’s always what I believe. It’s crazy to think this is our last Friday practice of the decade. I’m just glad I’m here. There was probably a lot of money lost thinking I wouldn’t still be here.

RD: Justin Fields is great. Jonah Jackson was just the perfect guy in that situation. The way the room has embraced hi, has been tremendous.. The offensive line has come together stronger than I’ve seen in a long time. Clemson defensive coordinator Brent Venables is one of the best defensive playcallers there is. If you want to win a national title, you’ve got to beat the best.

DS: First punt is going to be a fake (laughs). Oh, Ryan Day is right there. But really, in a game like this, the punt is one of the best offensive plays in the game. Will Spiers has done a great job for us this year.

DS: You don’t vote for it anymore, you’ve got to go earn it. I grew up in Alabama, I think it was 1966, there still mad about it. It would be cool to go back in time and take the top-four teams and do a playoff. I’m not for expansion of the playoff. I like the bowl game feel. I think the best team has won every single year.

Should the CFP semifinal be played on Jan. 1 always?

DS: I would much prefer it to be on January 1 and have consistency in that. I like being able to be home for Christmas and head out on the 26th. The turnaround was the same for everybody. The bigger challenge was for the players because they don’t get as much time off. And in recruiting, we usually have two weeks, but we just have one week.

RD: I’d like it to be on January 1 and keep it consistent. It was a challenge to get our guys healthy and prepared for this game.

RD: We’re always in the conversation year-in and year-out. What everyone’s opinion is right now doesn’t matter. What matters is how we play against Clemson. We just focus on doing everything we can to play a great game. We’re going against great teams.