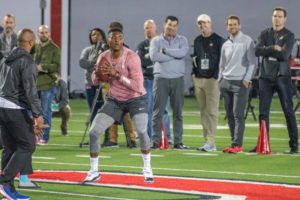 Those 11 players are also set to participate in the NFL Scouting Combine in Indianapolis, which runs from Feb. 23 through March 2.

Other former Ohio State players who were not invited to the combine but will likely participate in pro day include offensive lineman Branden Bowen, tight end Rashod Berry and defensive tackles Jashon Cornell and Robert Landers.