Ohio State’s Michael Jordan Poised For Move Back To Guard 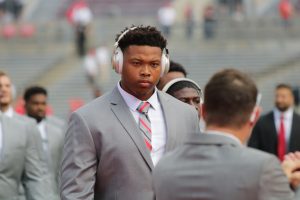 The same was true in 2017 when he became an All-Big Ten caliber performer. In 2018, though, Jordan slid over to center to fill a need for the team, and he earned All-American accolades in the process. But guard is still his more natural position, and that could be where the Michigan native lines up in 2019 as a senior.

“I can’t say enough what he did this year to step into that role, somebody his size, too, and how well he did and making (first team) All-American awards, you can’t say enough about his unselfishness,” Day said.

Jordan himself said a move back to guard would be his preference, and it would give him a chance to build on what he established as a freshman and sophomore.

“I got two years at guard, so I think anything I do coming back another year is just to build upon that, start where I left off, continue to build,” Jordan said. “It will only add value to me as a player. I could be useful to some coaches in the NFL.”

That’s all dependent on Jordan being in Columbus next season, of course. As a three-year starter and an All-American, he could decide to make the jump to the NFL, but he wasn’t ready to make an announcement one way or the other just yet.

The overall expectation is that Jordan is more likely to return, which would likely see him back as the starting left guard and a possible team captain next season. With Jordan back at guard, the Buckeyes could turn to redshirt freshman Josh Myers at center after Myers competed for the job last offseason as well.

“That would be a nice move for us to move Josh to center and then Mike over to guard,” Day said.