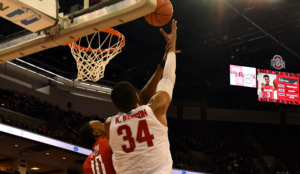 Kaleb Wesson, a junior big man for the Ohio State men’s basketball team, is one of 10 finalists for the 2020 Kareem Abdul-Jabbar Center of the Year Award, which is presented annually by the Naismith Memorial Basketball Hall of Fame.

Wesson leads the Buckeyes in both scoring (14.3 ppg.) and rebounding (9.8 rpg.) while shooting 46.3 percent from the field and 41.9 percent from beyond the arc.

The former state champion at Westerville South also boasts the most field goals made (101), free throws made (82) and blocks (25) on the team.

In his third season in scarlet and gray, Wesson is climbing the Ohio State record books, becoming Buckeye No. 58 to score 1,000 career points (1,121) and needing just one rebound to become the No. 22 player with 6oo career rebounds.

Wesson recently led the Buckeyes to their third straight victory with a dominant performance against archrival Michigan. The third-year center scored 23 points and grabbed 12 rebounds while shooting 9 of 14 from the field and 3 of 6 from beyond the arc.

Not only did Wesson dominate offensively, but held his counterpart Michigan 7-foot-1 center Jon Teske to a three-point game on 1-of-7 shooting. Wesson has begun to show he can impose his will on both ends, much like the legendary Abdul-Jabbar.

“The athletes on this list model many of the traits that made Kareem Adbul-Jabbar a world-class player,” President and CEO of the Basketball Hall of Fame John L. Doleva said. “Mr. Abdul-Jabbar is unmatched when it comes to his accomplishments at both the collegiate and professional level. As an advocate for education and character, he brings a unique perspective when evaluating talent and we greatly value his input throughout this process.”