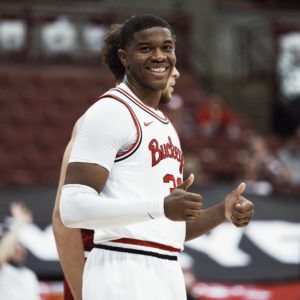 The media replaced Liddell and Williams with Indiana forward Trayce Jackson-Davis and Michigan forward Hunter Dickinson. Dosunmu and Garza were unanimous selections on both teams.

Liddell finished the regular season tops on Ohio State with 16.0 points and 6.5 rebounds per game. He shot 49.8 percent from the field and 36.2 percent from three, while also leading the team with 26 blocked shots.

Elsewhere in the All-Big Ten teams, junior guard Duane Washington was also selected to the third team by both the coaches and the media.

Washington is second to Liddell on the Buckeyes with 15.3 points per game while shooting 39.5 percent from the field and 36.8 percent from deep. He is second on the team to C.J. Walker in assists (76) and also adds 2.8 boards per contest.