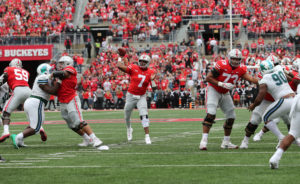 Ohio State sophomore quarterback Dwayne Haskins was named the Big Ten’s offensive player of the week a record six times this year. On Wednesday, he added to his trophy haul with a pair of seasonal awards in the conference.

Haskins, a first-year starter from Potomac, Md., was named the Big Ten’s Graham-George Offensive Player of the Year and the Griese-Brees Quarterback of the Year after setting conference single-season marks for passing yards (4,081) and passing touchdowns (42) during the regular season.

Haskins joins a long list of Buckeyes to be named the Big Ten’s Offensive Player of the Year. That group includes running back Eddie George (1995), offensive tackle Orlando Pace (1996), quarterback Joe Germaine (1998), quarterback Troy Smith (2006), quarterback Braxton Miller (2012-13) and running back Ezekiel Elliott (2015). He’s the third Ohio State player to be named the conference’s quarterback of the year, which has gone to a Buckeye five times previously. Miller won it in 2012 and 2013 while J.T. Barrett picked up the honor in 2014, 2016 and 2017.

Haskins and the No. 6 Buckeyes (11-1) are set to return to the field Saturday in Indianapolis for the Big Ten championship game against No. 21 Northwestern (8-4). Kickoff at Lucas Oil Stadium is set for 8 p.m. on FOX.