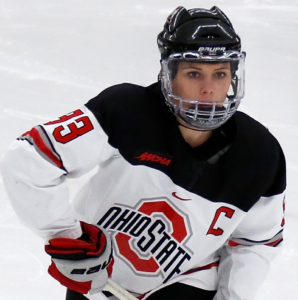 The No. 5 Buckeyes posted a 5-2-2 record in the month of February, outscoring their opponents 25-18 during the month. Ohio State took four points away from a road series against No. 2 Wisconsin with a win and a draw, cementing its status as one of the nation’s premier programs. The Scarlet and Gray concluded a successful month by sweeping Minnesota State in the WCHA First Round.

An O’Fallon, Mo., native, Dunne earned her second defenseman of the month honor in as many months. She anchored the Ohio State defense with 11 points, which ranked second on the team behind only standout junior forward Emma Maltais (13).

With two goals and nine assists, Dunne led all WCHA defensemen in goals, assists and points for the month. Coming up clutch for her team, Dunne also posted a conference-high five power play points with five assists.

With a three-assist outing in game one of the WCHA Semifinal, Dunne reached 96 points for her Buckeye career, moving her up to fourth in program history for defensive points. The senior captain also recorded a team-high 19 blocked shots in February, giving her 76 blocked shots for a season high.

Braendli, a standout goaltender, notched a 5-0-1 record in an impressive February, when she recorded two shutouts. The Zurich, Switzerland native also posted the best goals against average (1.12) and the best save percentage (.960) of any WCHA netminder.

During the Buckeyes’ impressive weekend against the No. 2 Badgers, Braendli totaled 74 saves to lead the league and set a new season-high 37 saves in game two.

The Buckeye goaltender was selected as the WCHA Goaltender of the Week for back-to-back weeks as well as an NCAA Second Star of the Week nod. The player of the month honor marked Braendli’s first this season and second of her career.