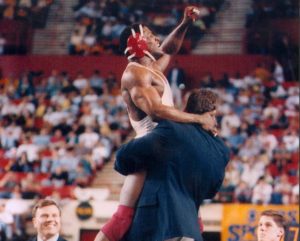 On May 16, former Ohio State wrestler and standout MMA fighter Kevin Randleman was posthumously announced as an inductee to the UFC Hall of Fame by UFC president Dana White.

“Kevin Randleman was one of the first real athletes in the early days of UFC,” White said in a statement. “He was a two-time NCAA Division I National Champion and All-American wrestler at The Ohio State University. He was the fifth heavyweight champion in UFC history and one of the first athletes to successfully compete at both heavyweight and light heavyweight.

“He was a pioneer of the sport and it’s an honor to induct him into the UFC Hall of Fame Class of 2020.”

While the recognition was for Randleman’s pro career – which started in the UFC in 1999 before a move to Pride Fighting in 2002 and saw Randleman accumulate a 17-16 record, including a heavyweight title at UFC 23 and title defense at UFC 26 – much of his best work was done in Columbus.

Nicknamed “The Monster,” Randleman won two NCAA titles as a Buckeye at 177 pounds in 1992 and 1993 (the first Buckeye to claim two titles), and was named an All-American three times on his way to 108 career wins. It was during his time at Ohio State where Randleman developed into one of the most feared wrestlers on the planet, an unstoppable athlete with a legendary work ethic that was, for much of his career, still learning the technical side of fighting.

During his time at Ohio State, Randleman connected with many wrestlers and coaches, including assistant Mark Coleman, who would later help him break into the professional ranks. Coleman spoke at length about his former pupil and longtime friend following the induction announcement.

“Emotions, a lot of them,” Coleman said of his immediate reaction to the news following a UFC broadcast. “I’ve been waiting for this day for a long time. I wasn’t expecting it. I knew I was doing an interview with you, but all of a sudden I see my best friend getting inducted.

Coleman also spoke highly about Randleman’s prowess as a fighter and character as a person.

“Explosive power, talented, athletic, any positive thing you could put with this guy, he did it,” Coleman said. “On his best night, he could have beat anybody. I got to train with him. I got to coach him. Such an honor. I miss him so much. I think about him everyday, all the time.

“If you don’t know him, just look. You’ll become a big fan of his. Every fight he was in was a highlight. You got the Fedor [Emelianenko] slam, the Randle-plex, the [Mirko] Cro Cop knockout, some double knees to the head. The man could do anything. When he prepared properly, he was a danger to any person out there and a nice guy. A caring guy. We did everything together. We lived together. We trained together. We fought together.

“The most charismatic guy I’ve ever met. People loved him. He’s missed so much. On social media, he’s got fan clubs all over the country, all over the world. He had his moments where he scared the hell out of you, but he’d quickly come back and apologize, and you just can’t help but love the guy.”

Randleman also crossed paths with current Ohio State wresting head coach Tom Ryan, who was wrestling at Iowa at the time. Ryan was close with Iowa 167-pounder Mark Reiland and 177-pounder Bart Chelesvig, both of whom frequently battled with Randleman.

“I know Kevin pretty well,” Ryan told BSB. “Obviously, I did not coach Kevin, but Kevin and I were in college at the same time. Kevin wrestled at Ohio State while I was in Iowa, and he was a competitor of two of my good friends at Iowa, Bart Chelesvig and Mark Reiland. I had the good fortune of watching him compete and he was just an absolute terror on the mat, and then obviously went into the MMA world and was a terror there. One of the elite athletes, I would say, in NCAA Wrestling history.

“Also, he was an incredibly gifted person. I never coached him, but my understanding was he absolutely was a incredibly hardworking person. And when you mix the two, you usually have something pretty special, and that’s Kevin Randleman.”

Ryan and Randleman grew closer when Ryan came to Columbus as the new wrestling head coach in 2006, including the creation of a yearly summer camp in Las Vegas that the two hosted together, prior to Randleman’s death at 44 in 2016.

“When I got the job here, my relationship with Kevin grew,” Ryan said. “I would do a camp with him every summer out in Vegas. I would go out to Vegas and I’d do a wrestling camp with him. So I got to know he and his wife and his son. Obviously, his death was tragic, he was just too young.”

While Randleman’s impact on Ohio State, the world of MMA and the people he grew close to is immense and obvious, the impact that those people and institutions had on him was just as large.

“When I think of Ohio State, I think of the greatest university in the world,” Randleman said in 2015. “I met and am friends with some of the greatest people I’ve ever known while I was there. A black kid from Sandusky, Ohio, you just don’t think you will get the opportunity to represent the school that in Ohio, is the only thing that walks.”