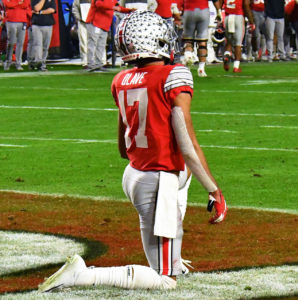 Chris Olave thought Justin Fields started to scramble, so he broke off his post route with Ohio State trailing Clemson by six points with 43 seconds left in the College Football Playoff semifinals.

Fields threw the pass where he expected Olave to be, but it was intercepted in the end zone, effectively ending the Buckeyes’ season with a heartbreaking 29-23 defeat in the Fiesta Bowl.

Olave, now a junior, had to live with his mistake the entire offseason, which head coach Ryan Day did not blame him for at all. Day described the pain Olave felt following Ohio State’s lone loss in 2019, indicating he expected the standout receiver to use it as fuel.

“I love Chris Olave,” Day said. “I’m not sure he ate solid food for about three or four days after that game; he was crushed. But that’s not the reason why we lost the game. He threw his heart on the field, and he thought Justin was scrambling. When you play in games like that, things like that happen. Unfortunately, that happened.

“Chris is the ultimate competitor. Nobody cares more than Chris and I know he’s going to come back even more hungry. He’s going to be a leader in that room.”

In football, mistakes can be forgotten and forgiven when a player of Olave’s caliber makes up for it on the next possession, or even in the next game. For Olave, his miscue happened on the last play of the final game of the season for Ohio State.

The San Marcos, Calif., native carried the weight of his error into the offseason, but his opportunity to redeem himself nearly vanished with the COVID-19 pandemic shutting down spring ball and initially canceling the Big Ten season. When the season was reinstated, perhaps no one was more excited than Olave to get that metaphorical monkey off his back.

“I’ve been ready for a long time,” Olave said Oct. 21 ahead of the matchup with Nebraska. “You think about that game and how the season ended and what could have happened. To finally be able to suit up and play a real game after practicing for these last three months, it is definitely a blessing.

“You think about so many things over the quarantine and what could have happened. I’m just ready to play along with my team. I can’t wait to go out there Saturday and show the world.”

Wasting no time reminding the world why he is one of the top receivers in college football, Olave snagged six receptions for 104 yards in Ohio State’s 52-17 victory over Nebraska in the season opener. He followed that up with seven catches for 120 yards and two touchdowns at Penn State.

A former three-star prospect, Olave has always been known for his incredible work ethic. He first made a name for himself on special teams, highlighted by a blocked punt against Michigan as a true freshman in 2018. Olave also hauled in two touchdowns in the Buckeyes’ 62-39 victory over the Wolverines, quickly becoming a fan favorite.

In response to his gaffe at the Fiesta Bowl, Olave took his already-impressive dedication to another level. Having so much time off only made it tougher for the talented wideout, but he came back stronger and used his motivation to ignite his teammates.

“It was tough,” Olave said Sept. 29. “I care so much about this team and this university. The first couple months were tough, I don’t think I still have gotten over it. I was going through it for like 4-5 months especially during quarantine. With all that free time, when I found myself getting bored and I was going through it, I just went and worked out. I found myself working out 2-3 times a day. Just trying to take my mind off things, I tried to play video games and hang around my brothers, hang around my family, but it was tough.

“When we got back, I just wanted to try to get better every day and try to spread that energy throughout the receiver room. Try to be the best room in the nation, so I don’t think I’ve gotten over it still. I’ve still got that chip on my shoulder, and I want to show the world.”

The way Olave talks about his one slip-up makes it seem like he did not have one of the best seasons by an Ohio State receiver in the program’s illustrious history. As a sophomore, he corralled 49 catches for 849 yards and 12 touchdowns, which tied him for the fourth-most scores in a single season by a Buckeye with Devin Smith and Parris Campbell.

How does a player who averaged 17.5 yards per reception and scored 12 touchdowns improve?

“I am just trying to be consistent,” Olave said. “I’m trying to lead on and off the field. I worked by myself a lot and watched a lot of film. I just tried to get better on my own. I worked on my feet and on how to be a better route runner. I worked on my strength to take it to another level. I just want to be the best in the country at what I do.”

When Olave was working out incessantly to make up for his mistake and prove just how great he is as a receiver, many pundits theorized that he would leave for the NFL if the Big Ten did not have a season. That could not be further from the truth, however, as wide receivers coach Brian Hartline explained that the junior wideout did not waver.

“Chris has always been on the side of being a Buckeye and graduating,” said Hartline. “The talk of him leaving was nowhere inside this building, more so outside. His desire to be part of something special and get his degree was never more emphasized than after that last game in Arizona.”

Olave confirmed what his position coach said, emphasizing the fact that he could not advance to the pros with his botched route as his final play in scarlet and gray.

“I would have come back. That’s a guarantee,” Olave said. “I couldn’t leave as that as the last play.”

Part of what made Olave so eager to get back to action was having another year to develop his chemistry with Fields, who was a Heisman Trophy finalist in his first season after transferring from Georgia.

“He knows our body language and sometimes when we miss a ball or something is off, we get together and he tries to show us what he wants,” Olave said of Fields. “I try to show him what I want and where I want the ball at. It’s little things like that to make it happen on game day.

“There is a lot of conversation, especially this week where we have a lot of plays in. We got together, he and I. Whenever you miss the ball, he goes up to the receiver or the tight end or the running back and tries to fix things. Right after the play, I go up to him and tell him how I’m going to do this or that just so we can get on the same page.”

Generally, he is rather soft-spoken, but Olave did not mince words when discussing his quarterback. He expects the chemistry between him and Fields to continue to blossom as the comfortability grows.

“In this building, we feel he is the best player in the country,” Olave said. “We know what he is capable of. When we’re on the field together, he knows where everybody is going to be. When I run my routes, expect the ball to be there. He expects me to be there. We hold each other to higher standards.

“We just want to be the best in the country.”

The dynamic tandem of Olave and Fields displayed their improved chemistry against the Huskers to open the season, with Olave exceeding 100 yards for the second time in his career.

Beyond making personal progress and building his connection with Fields, Olave was challenged by Hartline to become a more prominent leader.

“There are a lot of challenges for him, just learning to become more of a leader and grow,” Hartline said. “His growth has been phenomenal, really as a person. I love coaching him. We love having him in the room. And I’m really excited that he gets a chance to play this fall and is not waiting further down the road to do that.”

While he is not the most vocal player, Olave shows his teammates how to stay focused on the grind to maximize their potential. In addition to his work ethic, Olave’s perseverance helps make him a leader in the receivers room.

“His development as a person has been phenomenal,” Hartline said of Olave. “I love coaching him and love having him in the room. We are always teaching guys at different levels. I know that, if my message isn’t clear, guys like Chris can help put it in a language that I’m missing a beat on.

Before COVID-19 led to the cancellation of spring sport activities, Olave had already made quite the impression on his coaches and teammates with his demeanor in winter workouts. After just three spring practices, Hartline expressed how thrilled he was with his standout receiver’s response to the bowl game blunder.

“I’m not sure if anybody cares as much as him about himself, his brothers, his teammates, his peers. He’s a great guy to coach, very blessed by it,” Hartline said. “It really hit him a different way. I think that it has a chance to have a ripple effect in his career and just recalibrate. Not make it any better; he already worked really hard but just to enhance where he thought he was and then be that much better.

“I don’t know if it’s coming off the Fiesta Bowl or if it’s just the next step in his progression. He’s very motivated in wanting to be the best player in the country and goes from that perspective.”

In January, Olave was rated as the No. 10 wide receiver in the country by Pro Football Focus. Some might boast about such an achievement, but Olave is unlike most. He responded with a simple tweet, “Not good enough. Back to work.”

The former San Marcos Mission Hills standout has made it clear he wants to be the best wide receiver in the nation. Olave, who still starts as a gunner in punt coverage, was named to the watch list for the Biletnikoff Award, which honors the outstanding receiver in college football.

What does Olave need to do to become the best of the best?

Hungry to avenge his mishap and eager to exceed expectations, Olave calmly answered question after question about his fatal flaw from the Fiesta Bowl throughout a tumultuous offseason. Instead of dwelling on it, he focused on how he can help the Buckeyes return to the CFP and end the season with a national title.

“It didn’t feel real in the moment or the day after,” Olave said. “Especially for it to happen in front of millions of people that were watching. To end my season like that was tough. Everybody has their setbacks, everybody has their downs, and it’s about how you react to it.

“I’m ready to help my team and ready to ball this year.”