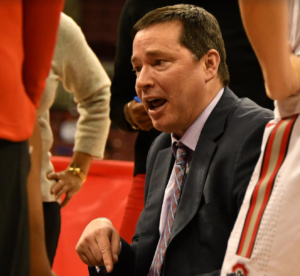 Ohio State announced Tuesday, just one day after finding out its full schedule and one day before it was set to begin, that the women’s basketball team’s season debut against Akron has been canceled “after Akron shared results of its most recent testing.”

The press release said the decision was made “out of an abundance of caution and with the welfare of the student-athletes, coaches and event staff in mind.”

Following the news, Ohio State head coach Kevin McGuff told BSB that, as of right now, Sunday’s 4 p.m. matchup against Duquesne is still on to play, and that both the Buckeyes and the Zips are working to try and reschedule the matchup.

McGuff also said he found out the news at around 1 p.m. today, and that he got the reaction from his team that one would expect after telling them that the game was canceled.

“They were just kind of shocked and in disbelief,” McGuff said. “They were obviously ready to play somebody and were excited about this, but they handled it about as well as you could and we had a productive practice after.”

Ohio State will swap tomorrow’s game with a practice, McGuff said, and will take Thanksgiving off before going back to practice as scheduled Friday.

The Buckeyes come into the season as the No. 20 team in the country after a 21-12 campaign a year ago, and McGuff said he was really hoping to simply see his team face new competition for the first time since March.

“Disappointed because I wanted to get this thing off the ground tomorrow, but at the same time, just trying to make sure that we adjust and control what we can control and just get prepared for when we do play a game,” McGuff said. “I was really hoping we would get this one under our belt just to see what we look like, and just, yeah, it is what is, we just have to absorb this and adjust and move on.”