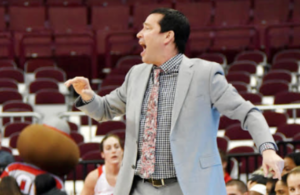 After a 2019 recruiting class that ranked No. 4 in the nation and featured seven freshmen, Ohio State has already gotten to work on its 2020 class, and today, it officially signed two of its three verbal commits for next season.

The pair of commits are Anyssa Jones and Gabby Hutcherson, who both are three-star prospects according to ESPN and both reside from local Westerville South High School.

Jones was the first commitment for the Buckeyes in the class, verbally selecting Ohio State on Oct. 1, 2018 when the team only had three commits for its 2019 class.

The 5-9 guard is a three-star and ranked No. 29 among guards in the class, but is not ranked in the Top 100 overall players.

This May, ESPN’s Dan Olson described Jones at the Ohio Midwest Showdown as a “crafty, athletic lefty combo-guard” that “manufactures, knocks down jumpers to the arc; handles in transition game,” and can finish plays coast-to-coast.

Her teammate, Hutcherson, committed to the Buckeyes just a week after Jones did, and gives Ohio State depth at the forward position.

Hutcherson is 6-2 and ranked the No. 20 forward in the 2020 class and, according to Olson’s scouting report from July 2017 at the Michigan vs. Ohio Border Battle, she possesses loads of talent.

Olson calls Hutcherson an “athletic stretch-four” that “rebounds, handles in transition; pulls the defense to the arc,” and who is a mismatch creator” that plays “taller than advertised,” while also being a versatile defender.