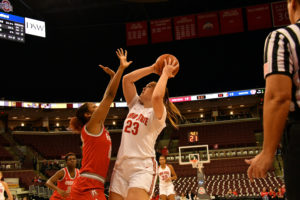 As part of end-of-the-season women’s basketball coverage, Buckeye Sports Bulletin will be looking at the previous year of every returning player for Ohio State heading into the 2020-21 campaign, and their importance to the future of the Buckeyes. Next in the series is forward Rebeka Mikulasikova.

Rebeka Mikulasikova was one of two forwards in the 2019 class to come from Europe, with the other being Aixa Wone, who came from Pamplona, Spain.

But Wone has departed to play for Georgia Tech after just one season, and Mikulasikova, who resides from Nitra, Slovakia, is now with Hungary’s Dorka Juhasz as the two European forwards remaining on the team.

Mikulasikova was not able to finish her first season with Ohio State in the way she would have hoped, missing the Buckeyes’ Big Ten tournament run due to a high ankle sprain that was suffered in practice.

Despite that, the 6-4 forward had a strong first season at the collegiate level, finishing with 7.7 points per game, and was more efficient than any other player on the roster. Mikulasikova finished her 29-game freshman year shooting 50.3 percent (80 of 159) from the field, 46.3 percent from three (25 of 54) and 82.2 percent (37 of 45), all of which were tops on the team among players that finished the season on the roster.

Mikulasikova showed some of this efficiency early on in her first year, finishing with 14 points and six rebounds on a perfect 7-of-7 shooting in 20 minutes against Kent State on Nov. 21. She again flashed in a losing effort against South Dakota on Nov. 29, finishing with 19 points on 5-of-9 shooting from the field, 2-of-3 shooting from deep, while also hitting 7 of her 8 free throws.

Down the stretch, Mikulasikova became a more consistent offensive presence off the bench, finishing with double-digit points in seven of the last 13 games.

It is pretty clear what Mikulasikova’s clear strength is in her game: her shooting. Pulling off a 50-46-82 clip in any season would be a tremendous feat, and Mikulasikova put up those shooting percentages in her first year with the team.

At 6-4, she is a matchup nightmare on the offensive side of the floor, and will frequently find opportunities to shoot the deep ball throughout her collegiate career. Her efficiency was unmatched on this Ohio State team, and her ability to score in bulk is great to have off the bench while more veteran forwards like Dorka Juhasz and Aaliyah Patty are likely to remain starters.

And the good thing for the Buckeyes is that Mikulasikova still has definite areas to improve in, specifically with her inside game and rebounding. As previously mentioned, she is often the tallest player on the court, but she did not use that size to her advantage enough, averaging just 2.9 rebounds per game.

This also translated to the defensive side, where Mikulasikova had just 10 blocks all season and often seemed just a step too slow when trying to stop the opposition. These are very fixable issues, and could allow her to be a more complete forward that can be counted on for extended minutes.

Mikulasikova is the only returning player from last year’s team that was a non-starter at the end of the season, and she brings with her some ridiculous shooting success that will always be a key piece of this Ohio State team.