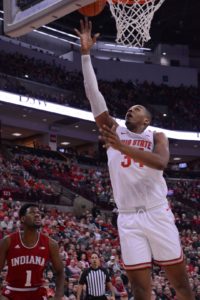 “I’ve got great respect for the team we played, how hard they play and how well they’re coached,” Ohio State head coach Chris Holtmann said. “It was a great win for our guys. Players win games. We had great leadership, in particular, between Kaleb and C.J. Walker on both ends.”

The Buckeyes (14-7, 4-6) turned to the veteran trio of junior big man Kaleb Wesson, senior wing Andre Wesson and junior guard C.J. Walker to lead the team to victory over Indiana (15-7, 5-6).

Kaleb Wesson scored 15 points on 7-of-12 shooting and grabbed a game-high 11 rebounds, while Andre Wesson added 10 points and four assists on 3 of 6 from the floor and 3 of 5 from deep in the win.

The Buckeyes were without freshman guard DJ Carton, who stepped away from the team for personal reasons, and Walker rose to the occasion in his absence. The junior transfer from Florida State tallied 14 points, four assists and three steals while hitting 5 of 9 shots and 2 of 5 three-pointers.

“DJ brings a lot to the table,” Walker said. “He can get to the basket, create his own shot and others’, so we just try to figure out another way where everybody else can step up and do that.”

The Hoosiers cut the Buckeyes’ second-half lead to six points with a 5-0 streak on a triple by sophomore guard Rob Phinisee triple and a layup by freshman forward Trayce Jackson-Davis from Phinisee.

Kaleb Wesson answered with a 4-0 spurt by himself to push Ohio State’s lead to 37-27 at home.

Ohio State and Indiana battled back and forth until the Buckeyes pushing their lead to 14 on an Andre Wesson three-pointer. Indiana redshirt freshman forward Jerome Hunter, a Pickerington native, seemed to give the Hoosiers a spark by converting an and-1 finish, but 11 points was the closest they would get.

The Buckeyes rallied on a 10-2 run, highlighted by three triples from sophomore wing Justin Ahrens, who has apparently found his shooting stroke, finishing with 11 points in 14 minutes off the bench.

“You can’t leave Justin or he’s going to kill you,” Kaleb Wesson said of Ahrens. “That’s what he did today; he hit shots for us, and that was big.”

After Indiana junior forward Joey Brunk threw down a dunk to take a 7-6 lead with 17:06 left in the first half. From that point, the Buckeyes held the Hoosiers without any points for six and a half minutes.

Ohio State used a 9-0 run to take a 15-7 lead before Phinisee made an Indiana layup to end the drought. Following the lay in from Phinisee, the Buckeyes responded with a 7-1 stretch to extend their lead to 12 points.

The Scarlet and Gray led by as many as 14 in the first half, but the visiting Hoosiers cut that lead to nine before halftime.

With Carton out for the foreseeable future, Walker is not overwhelmed by the increased expectations.

“I’m ready for this,” Walker said. “Once he told us, I had to change what I have to do, it’s created a little bit more weight on my shoulders, but I feel like I’m ready for it. And I’m just going to continue to do what I do and make the right plays for our team.”