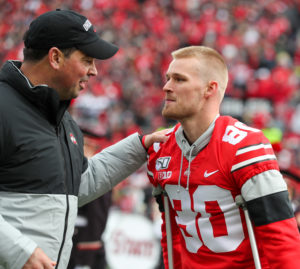 Ohio State wide receiver C.J. Saunders had his request for a sixth year of eligibility denied by the NCAA, head coach Ryan Day announced during a teleconference on Tuesday afternoon.

He will be joining the coaching staff, though, in some sort of capacity.

A walk-on-turned-scholarship player from nearby Dublin (Ohio) Coffman, Saunders finishes his college career with 27 catches for 294 yards and one touchdown in 23 games. He was named a team captain for the Buckeyes in 2019, but missed the entire season with a knee injury suffered during fall camp, thus the application for the medical hardship waiver.

With starter K.J. Hill off to the NFL, Saunders hoped to battle sophomore wide receiver Garrett Wilson for playing time in the slot. He’ll instead join Ohio State’s coaching staff in a to-be-determined capacity. The Buckeyes are now  down to 85 scholarship players, meeting the limit ahead of the opening of fall camp on Friday.