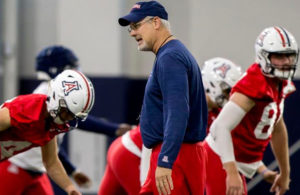 According to a report from Yahoo Sports’ Pete Thamel, Ohio State is set to hire former Iowa State head coach Paul Rhoads as a defensive analyst, a role in which he’ll assist the Buckeyes’ on-field coaches with scouting and game planning.

The addition of an analyst is new for Ohio State, thought it’s fairly common for big-time programs across the country to fill those kinds of roles with former head coaches who are in the market for another gig. Rhoads was not retained by the Wildcats when head coach Kevin Sumlin was fired at the end of last season.

Buckeyes head coach Ryan Day was asked about potentially added an experienced coach to the support staff during his press conference on Feb. 3, particularly as the Buckeyes look to replace the experience lost by former co-defensive coordinator Greg Mattison’s retirement.

“It’s something that I’ve spent a lot of time thinking about,” Day said.“Every program is different. You have to do what’s right for your program. Now that I’m going into (my third year as head coaching), taking a hard look at that and seeing if there are some people around who would be the right fit.

“I think the big thing for us is that it has to be the right fit, culturally. It has to be the right personality that brings the right things to the table. So, certainly, looking at all those things and over the next couple of weeks, we’ll have an opportunity to bring some guys in and possibly talk about those types of things.”