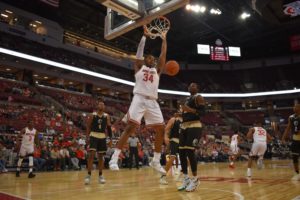 For the second straight game, Ohio State needed a second half surge to overcome a disastrous end to the first half and it nearly wasn’t enough.

After leading by as many as 12 in the first half, the Buckeyes conceded the advantage by halftime before rallying to defeat Bucknell 73-71 on Saturday afternoon at the Schottenstein Center.Ohio State nearly conceded the game in the final minute as Bucknell had two shot attempts in the final 14 seconds to win the game, both of which fell short.

The Buckeyes were led by Kaleb Wesson, who finished with a double-double, tallying 22 points and 10 rebounds. Ohio State held off the hot-shooting Bison, which converted on 9-of-17 first half three pointers but shot just 30.8 percent from the floor in the second half.

Ohio State’s second half started much like the first half ended. Trailing by one to start the second frame, the Buckeyes allowed a 9-2 Bucknell run, as the Bison took an eight point lead with 17:19 to play. During that run, the Buckeyes lost Andre Wesson to an injury after he was hit in the face while going for a loose ball. He was taken to the locker room, but did return to action minutes later, despite missing three teeth. He finished with four points and nine rebounds.

Ohio State responded with a run of its own, rattling off a 15-3 spurt that was highlighted by a pair of Keyshawn Woods three-pointers, the last of which forced a Bucknell timeout as the Buckeyes took a 56-52 lead with 12:22 to play. Woods finished with 13 points in the victory.

Chris Holtmann’s squad carried a 62-56 lead into the eight-minute timeout and Ohio State built a 11-point lead with 4:28 to play. However, the Bison crawled back to within two points with 20 seconds remaining but failed to find the bottom of the basket with two shots on the final possession of the game.

After converting on better than 50 percent of their three-pointers in the first half, Bucknell made just three of their final 13 attempts from long range in the second.

The Buckeyes started hot offensively and played through Kaleb Wesson early and often. Ohio State’s big man scored or assisted on the first 15 points of the game for the hosts, who led 15-10 with 12:56 to play in the first half. In the first half alone, Wesson had 13 points, six rebounds and four assists.

Despite playing with a clear disadvantage in size, Bucknell hung around by connecting on six of their first 12 three-point shots. Just as it looked as though Ohio State was going to pull away, the Bison got hot.

Trailing 37-25 with 4:04 to play in the opening frame, Bucknell rattled off a 15-0 run to take a 40-37 lead just before the half. A Keyshawn Woods jumper with just seconds left sent the Buckeyes into halftime down 40-39 despite holding a 19-9 advantage on the boards in the opening 20 minutes.

Ohio State is set to return to the court Tuesday to take on Youngstown State at the Schottenstein Center. Tip is set for 7 p.m. on the Big Ten Network.