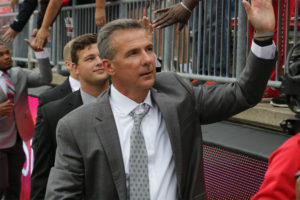 The Ohio State football team still has some questions to answer after a 36-31 win over Nebraska, and the victory wasn’t enough for the Buckeyes to improve their standing in the College Football Playoff hunt.

Ohio State (8-1, 5-1 Big Ten) was ranked 10th in the second College Football Playoff standings of the season, which were released Tuesday night. The Buckeyes had been No. 10 heading into their bout with Nebraska, and they stayed put despite two teams ranked ahead of them – LSU and Kentucky – both losing. Ohio State was jumped by West Virginia in the latest standings.

Alabama was ranked first for the second week in a row, followed by Clemson, Notre Dame and Michigan in the top four. Georgia, Oklahoma, LSU, Washington State and West Virginia were ranked ahead of the Buckeyes as well.

From the Big Ten, Ohio State’s next opponent, Michigan State, was ranked 18th, while Penn State was 20th and Iowa was 21st. The Buckeyes beat Penn State, 27-26, earlier this season on in Happy Valley.

Ohio State is set to return to the field Saturday against Michigan State in East Lansing, Mich. Kickoff is scheduled for noon at Spartan Stadium, and the game will be broadcast on FOX.