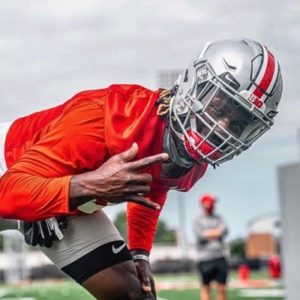 Ohio State running back Trey Sermon had his black stripe removed, affirming his place as a Buckeye.

🚨 Black Stripe Alert ‼️@treyera becomes the first Buckeye to lose it in the 2020 season! 👏#GoBuckeyes pic.twitter.com/6st11fG0re

Sermon is a senior tailback who came to Columbus via the transfer portal from Oklahoma, where he played the previous two seasons.

At Oklahoma, Sermon suffered multiple injuries and also fell down the depth chart following the emergence of fellow running back Kennedy Brooks.

After earning honorable mention All-Big 12 nods as a freshman and sophomore, Sermon only saw 54 carries as a junior, gaining 385 rushing yards and scoring four touchdowns. Though he also added eight receptions for 71 yards and one score, Sermon’s production took a significant dip from his time as an underclassman.

As a sophomore in 2018, Sermon took 164 carries for 947 yards and 13 touchdowns along with 12 catches for 181 yards in the passing game. His performance earned him honorable mention All-Big 12 recognition, ranking third in the conference in rushing yards.

The 2017 Big 12 Offensive Freshman of the Year, Sermon, ran for 744 yards and five touchdowns on 121 carries in his first season in Norman, Okla. The honorable mention All-Big Ten back added a career-high 16 catches for 139 yards and two touchdowns.

The Buckeyes brought Sermon into the fold following an injury to presumed starting running back Master Teague. With Teague and sophomore back Marcus Crowley on the mend, the only other Buckeye backs left on the roster were redshirt freshman Steele Chambers, fifth-year senior Demario McCall and incoming freshman Miyan Williams.

Sermon has one year of eligibility to make the most of, and the removal of his black stripe represents the beginning of his opportunity.