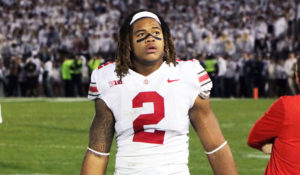 As we celebrate our 25th anniversary, we bring you our preseason watch list, featuring 92 outstanding defensive players vying for National Defensive Player of the Year honors https://t.co/Ud41QSaZkG pic.twitter.com/FUYHPpKam6

The 6-5, 265-pound Young has racked up numerous preseason recognitions following a sophomore season in which he recorded a team-leading 15.5 tackles for a loss and 10 sacks. He’s also been placed on the watch list for the Chuck Bednarik and Big Ten Defensive Player of the Year awards and was among the 10 players named a preseason Big Ten honoree.

The 6-2, 205-pound Fuller, meanwhile, earned his second preseason recognition in as many days (Jim Thorpe Award). He was tied with linebacker Malik Harrison last season for the team lead with 81 tackles, but spurned the NFL for one final season in Columbus.

Named after the legendary two-way player from the University of Minnesota, the Bronko Nagurski Trophy has been awarded annually by the Football Writers Association of America since 1993. Fuller and Young will look to become just the second Buckeye to win the award, joining linebacker James Laurinaitis in 2006.

Five finalists will be named in Nov. 20 and the winner will be announced during the 25th Annual Bronko Nagurski Trophy Banquet on Dec. 9 in Charlotte. Ohio State head coach Ryan Day will be the keynote speaker.