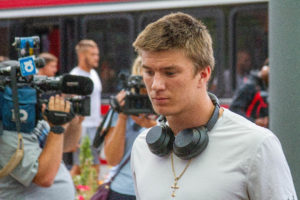 At 6-foot-2 and 185 pounds, Shaw is a dynamic athlete with a lot of versatility. While at the Bullis School — which Dwayne Haskins attended — Shaw excelled in both football and lacrosse, earning All-American honors in lacrosse.

Shaw played safety on defense and running back and wide receiver on offense in high school. As a junior, the Eldersburg, Md., native caught five touchdown passes and one rushing TD, while returning a kickoff and a fumble for scores.

Earning Defensive Player of the Year in the competitive Interstate Athletic Conference, Shaw came to Columbus as the No. 45 safety in the country and the No. 10 overall recruit in Maryland.

Special teams coordinator and assistant secondary coach Matt Barnes mentioned Shaw as a young player who is already having an impact on special teams during fall camp.