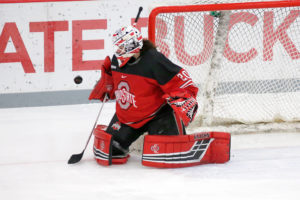 Braendli, who hails from Zurich, Switzerland, had a league-high 74 saves on the weekend. She followed up a 36-save performance with a 38-save outing in the series finale at then-No. 2 Wisconsin, who the Buckeyes came away with four points against.

The second-year standout only allowed two goals against the second-ranked Badgers, including one power-play goal. In the overtime finale, she saved a penalty shot attempt to maintain the Buckeye lead in the second period.

Braendli was also named the NCAA Second Star of the Week for her performance, marking her fourth NCAA honor. The WCHA Goaltender of the Week honor represented her fifth.

Sophomore forward Gabby Rosenthal tallied a team-high and league-high three points from the weekend with a goal and two assists. All of Rosenthal’s points came during power plays in the second period of the Buckeyes’ 3-1 win against the Badgers.

The Blaine, Minn., native assisted on the first two power-play goals and then scored a goal of her own – all within a two-minute span. Rosenthal also had six blocked shots which tied for second on the team for the weekend.

The award marks Rosenthal’s first career conference honor. The sophomore forward is fourth on the team with 12 goals and sixth in points at 18.