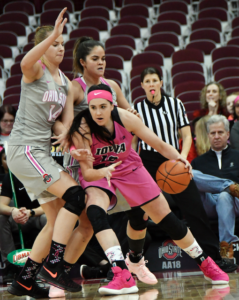 After a competitive finish to the second quarter kept the Ohio State women’s basketball team within two buckets of Iowa into halftime, the No. 16 Hawkeyes pulled away in the third quarter and handed the Buckeyes a 78-52 rout Sunday before 5,344 at Value City Arena in Columbus.

To combat Gustafson, Ohio State’s offense shot only 32.8 percent (20 of 61) from the field and 26.3 percent (5 of 19) on three-pointers, led by freshman forward Dorka Juhasz’s 12 points and game-high 10 rebounds as she posted her eighth double-double of the season.

“Definitely was a hard job to guard her,” said Juhasz, who was Gustafson’s primary defender. “The whole team had guard her, to be honest, because she’s a really good player and physical. She’s a senior, so I have to get tougher. I have to get stronger, for sure.

“In the beginning, we guarded her well and she didn’t get those shots that she got in the second half. We were just not there for the passes in zone in the second half. Of course, they have great passers, so they just passed the ball to her and she’s a great finisher around the basket.”

Off the bench with 11 points apiece, graduate guard Adreana Miller and freshman forward Aaliyah Patty rounded out the Scarlet and Gray’s double-digit scorers.

After an 8-0 hole 3:30 into the first quarter, the Buckeyes finally got on the board at the 5:40 mark with a triple from freshman guard Janai Crooms, who started and posted 10 points and distributed seven assists. The Hawkeyes built 17-4 advantage after an 8-2 run from the 5:12 point to 2:57 left in the opening period with freshman forward Dorka Juhasz’s layup sandwiched between, but OSU closed the final 2:40 of the frame with a 5-2 spurt to trail 19-9.

OSU’s momentum spilled into the second quarter after Patty’s layup 18 seconds in started an 8-2 surge that trimmed Iowa’s led to 20-17, culminated by Juhasz’s layup at the 5:51 mark. Both sides traded buckets before Patty’s pair of layups at the 3:12 and 2:52 points gave Ohio State its first lead, 27-26, of the game. Gustafson’s jumper with 1:39 left in the period sparked the Hawkeyes’ 5-0 spurt, capped by Kathleen Doyle’s layup and free throw after the foul with 49 seconds to go, that put the Buckeyes down 31-27 at halftime.

“We wanted to throw a couple things at her — play man, play zone, a little box-and-one on her — just to try to get them difference looks,” head coach Kevin McGuff said of Gustafson, whom the defense limited to 10 points in the first half. “That’s why I thought, in the second quarter, that kind of got them back on their heels and took them out of their rhythm. But then they kind of found their stride there in that third quarter, obviously, and we just didn’t have an answer for them.”

Out of the break in the third quarter, OSU stumbled as Iowa busted a 14-5 run into the 5:11 mark. Patty’s layup with 4:34 left in the period brought Ohio State closer to single digits, 45-34, but Iowa kept its foot down on the gas pedal and never led by less than 12 points the rest of the contest. The Hawkeyes closed the final 3:26 of the frame on a 13-3 surge that buried the Buckeyes, 58-37, into the fourth quarter.

“I think, one, they executed at a very high level in the third quarter and we didn’t,” McGuff said. “That stopped us from getting more opportunities offensively. You have to score when you play Iowa because they’re so efficient on offense. You know how it is — they start to get ahead a little bit and you start to press. You press on your shots and all of that, and we got a little bit rattled there.”

OSU showed signs of life in the last 10 minutes, starting with a 5-0 spurt from fifth-year senior forward Makayla Waterman in the first 2:20 of the period and cut Iowa’s lead to 58-42. Those proved to be Waterman’s only points of the game, though, and the Hawkeyes woke up immediately after with an 8-2 spurt that put them up 66-46.

“Their perimeters, they can all score,” Miller said of the Hawkeyes, who shot 53.4 percent (31 of 58) from the field with a 46-28 advantage on points in the paint and went 31.6 percent (6 of 19) from long range. “So a lot times we were really focused on the big girls and they would just kick it out, kick it out. It was just great ball movement. Our transition ‘D’ could have been a lot better, I must say. Just crucial stops. Once they got their momentum, they made big plays. Unfortunately, we didn’t pick up from that.”