Ohio State Remains At No. 5 In AP Poll 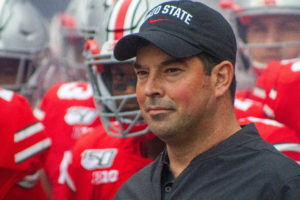 Just like with the second installment of the Coaches’ Poll, Ohio State has stayed at the No. 5 position in this week’s Associated Press Top 25 poll.

The top seven of Clemson, Alabama, Georgia, Oklahoma, Ohio State, LSU and Michigan all did not move, while only one team with a loss — Oregon at No. 16 — is in the Top 25.

Ohio State plays Cincinnati at noon Saturday, a team that finished No. 30 in voting this week after a 24-14 victory over UCLA. The Bearcats received a Top 25 vote from 16 of the voters, earning spots as high as No. 20.