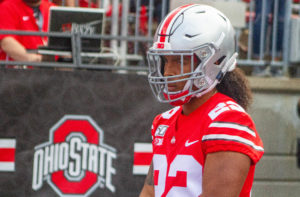 Steele Chambers is the lone healthy scholarship running back on Ohio State’s roster, and the redshirt freshman is up for the challenge.

“Whatever they need me to, just got to get bigger, faster, stronger,” Chambers said Dec. 8 following the Big Ten Championship Game. “Whenever my name is called, I need to be ready.”

The 6-foot-1, 220-pound tailback was expected to be third in line to replace standout runner J.K. Dobbins. However, an undisclosed injury to presumed starter, third-year sophomore Master Teague, and the lengthy recovery process for sophomore Marcus Crowley has thrust Chambers into the RB1 spot.

Chambers played in just three games for the Buckeyes in 2019, which was by design, keeping him under the maximum of four games for maintaining redshirt eligibility.

The former four-star running back totaled 135 yards and one touchdown on 19 carries in his first year in Columbus. Chambers’ debut season was highlighted by a 61-yard, one-score performance against Miami (Ohio) on eight carries (7.6 yards per carry).

Team-first by nature, the former two-time Georgia state champion loved what he saw in the development of Ohio State’s rushing attack, which ranked No. 5 in the nation in yards per game at 266.8.

“It’s great,” Chambers said of the Buckeyes’ success on the ground. “Being along for the entire ride to see how they develop, how we’ve gotten better, how we’ve just improved on every aspect of our run game, whether that’s blocking and actually running. It’s pretty cool just watching it all develop.”

Dobbins left big shoes to fill for Chambers, Crowley and Teague, breaking the Ohio State single-season rushing record as the program’s first 2,000-yard rusher, gaining 2,003 yards and scoring 21 touchdowns in the running game. The humble and intelligent Chambers took notes every step of the way.

“Just seeing what he’s done for this team has just been amazing,” Chambers said of Dobbins. “The guy’s a warrior, just watching him play every single down and just how he fights, how he prepares how he does everything. It’s just amazing being able to sit back and watch it.

“How he prepares, how he works. He is always in the film room, always watching film always taking care of his body. He  works harder and he prepares better than anyone on the team.”

Chambers, who the nation’s No. 11 athlete for 2019, was also quick to credit the ability of the Buckeyes’ offensive line.

“Their toughness – you can see it whenever you watch film,” Chambers said. “They’re always shooting off the ball. Just knocking people down the entire game. It’s just amazing the motor all those guys have.”

As a two-way standout at Roswell (Ga.) Blessed Trinity Catholic, Chambers led his team to back-to-back state titles at running back and linebacker. He became known for his versatility, high IQ and physicality on both sides of the ball.

Blessed Trinity ran the I-formation featuring an abundance of power runs to who else but Chambers.

Ohio State head coach and play caller Ryan Day runs a spread offense that had found most of its success through the air across his first two seasons. Day showed he will emphasize the strengths of his team in 2019, however, directing the fifth-best rushing offense in the country, which Chambers likened to his high-school days.

“I like it, because we bring the same mentality,” Chambers told Buckeye Sports Bulletin. “Coach Day always talks about getting first downs, how that’s like playing defense on offense. That’s kind of same mentality we had in high school, so it’s cool how that translated pretty smoothly for me.”

After being listed as an athlete and recruited as a running back, there was an assumption around the program that Chambers may flip to defense at Ohio State. In his first year in scarlet and gray, Chambers looked the part of a powerful runner, and the running-back room appears to be his home.

Chambers is bigger, stronger and faster following a winter of hard work and dedication in the weight room, and now more than ever, there is a “need to be ready.”