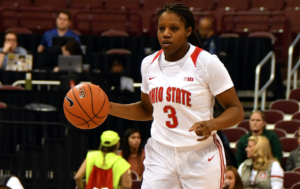 Fresh off its worst loss of the season — a 15-point defeat to South Dakota, Ohio State came out with a hot start in the second game of a pair of back-to-back matchups, and used that quick start to find a 64-46 win over Northern Iowa.

The Buckeyes went up 22-6 in the first quarter thanks in part to seven early points by freshman guard Madison Greene, and never looked back en route to a handed victory to finish the South Point Thanksgiving Shootout in Las Vegas at 1-1.

“I just think our energy defensively was really good,” Ohio State head coach Kevin McGuff told Buckeye Sports Bulletin. “We were contesting shots, we were rebounding and we were getting out in transition.”

Sophomore forward Dorka Juhasz led Ohio State with 14 points on 7-of-12 shooting, while freshman guard Jacy Sheldon followed close behind with 13 points on 5-of-6 shooting, helped by a pair of threes late in the game to seal the win.

Sheldon also brought in 10 assists for her first career collegiate double double, and McGuff said he was happy with how the first-year guard performed.

“She played really hard and she really competed out there,” McGuff said. “She was very efficient offensively and just really battled around the basket on the boards.”

Greene also had a strong game for Ohio State, tallying 12 points that also came on 5-of-6 shooting.

Ohio State shot 46.7 percent from the field, and forced the Panthers to 14-of-61 shooting, a meager 23 percent success rate.

After allowing 68 points and a 48 percent shooting day for South Dakota just a day ago, McGuff was satisfied with the defensive turnaround his team made.

“We kept them in front of us, we guarded the ball a lot better, we made them score over us,” McGuff said. “We kind of used our length to kind of alter some shots.”

The Buckeyes also forced 20 Northern Iowa turnovers, but also had 18 turnovers of their own. Sheldon led the team with four steals, while sophomore guard Janai Crooms had a team-high four turnovers.

Six of those turnovers came in the fourth quarter while trying to protect the lead, something McGuff said was due to some laziness late.

“We were playing pretty well with the ball, and then at the end we got kind of sloppy,” McGuff said. “We have to take care of the ball better for sure.”

Ohio State moves to 4-3 on the season and has an upcoming matchup with No. 8 Louisville at home on Dec. 5. The Cardinals are 8-0 and will certainly be on the rise after a 72-62 win against the current No. 1 team, the Oregon Ducks.

Following a .500 record in the tournament, McGuff said all the focus is on making progress as a team.

“I think the biggest thing is we have a long way to go,” McGuff said. “We have to get a lot better, we’re just light years from where we should be, and so we’re a work in progress. Take a day off, and get back to practice.”