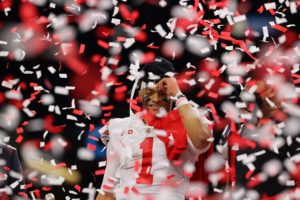 Ohio State junior quarterback Justin Fields received the Chicago Tribune Silver Football on Wednesday, an award given out to the best player in the Big Ten as selected by the coaches in the conference.

This award comes after Fields was named Big Ten Offensive Player of the Year and finished seventh in Heisman Trophy voting. The third-year quarterback has had a strong campaign for the Buckeyes so far, completing 73.4 percent of his passes for 1,906 yards and 21 touchdowns in seven games.

Fields is the 22nd Ohio State player to win the award, and the seventh in the past nine years. Dwayne Haskins and Chase Young won the award in 2018 and 2019, respectively, making this the third year in a row that a Buckeyes player has earned the Silver Football.