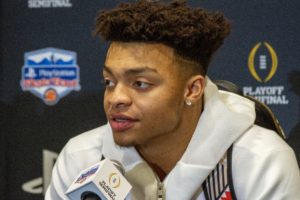 On Monday morning, just one day after he started an online petition calling for the Big Ten to immediately reinstate the 2020 football season, Ohio State quarterback Justin Fields appeared on ESPN Radio’s Keyshawn, Will & Zubin to discuss his plea.

“My biggest message is to get them to realize how bad our players want to play and just the guys that have come back for their fifth year, coming back off of injury, I think we owe it to those guys the most,” Fields said. “I’ve just seen behind the scenes all the work that they’ve put in and how much they really care about it, and I also believe all the coaches and all the parents of players want us to play, and they’re also safe with the guidelines Ohio State has set.”

As someone who is widely projected to be a top-five pick in next year’s NFL Draft, Fields doesn’t need to play another snap at the collegiate level. But he’s choosing to fight for his teammates who may not have the same opportunity, in addition to his love for the game.

“Really, it’s just my love for college football, and my love for my teammates at Ohio State,” Fields said. “I’ve seen the guys battle back from injuries, and I’ve seen how hard our coaches have fought for us to play, so really just for them, and just my love for the game.”

The Big Ten and Pac-12 announced last week plans to postpone fall sports until the spring, but the ACC, Big XII and SEC are forging ahead with their scheduled seasons. The lack of consistency is a big reason why Fields is fighting so hard for the Big Ten to reconsider.

“If the (other conferences) all think that we can have a season safely, then I don’t see any reason why the Big Ten can’t do the same,” Fields said. “What we’re doing at Ohio State is very safe. If we can get everybody on the same track in the conference, I think that will be a safe way to conduct a season.

"If the SEC, ACC and Big 12 all think that we can have a season safely, then I don't see any reason why the Big Ten couldn't do the same."

Groups representing the parents of players at Iowa, Michigan, Nebraska, Ohio State and Penn State have sent letters to Big Ten commissioner Kevin Warren asking the conference to reverse course and to provide transparency into the decision to postpone the season. They seemingly understand the risks associated with their sons playing amid the coronavirus pandemic, a sentiment Fields echoed.

“I think COVID brings a risk to everybody, but the question I would like to ask you is would we be more safe on campus playing football or off campus doing whatever,” Fields said. “I think you can contract (the virus) anywhere, but me personally, I feel safer at the facility and around my teammates knowing they’re going to get tested twice a week. I would have to argue back that my teammates are safer in the facility than out and about in the city.”

No matter what decisions are made in the coming weeks, Fields has the utmost respect for Ohio State athletic director Gene Smith, head coach Ryan Day and the numerous assistant coaches who were vocal in their fight to save the season.

“Whether it’s in the spring, whether it’s in the fall, I just know that they’ve been putting countless hours into phone calls and just talking to everyone they can to just have a season,” Fields said. “I know it’s important to (them), and it’s definitely important to the players, so that’s just what we want to be doing right now.”