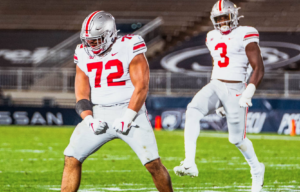 After getting shut out from conference honors in Week 1, Ohio State had two Big Ten players of the week following a 38-25 win over Nebraska.

Fields earned the honor after a dominant showing against the Nittany Lions, completing 28 of his 34 passes for four touchdowns, which brings him to six touchdowns with no interceptions on the season.

This was the first time that Fields, who was the Big Ten Graham-George Offensive Player of the Year and a Heisman Trophy finalist in 2019, has won a weekly award from the conference.

Togiai earned the first sack of his career against Penn State, then tallied on two more of a team high of three sacks on the game, to go along with his seven tackles. This was also Togiai’s first weekly honor from the Big Ten.