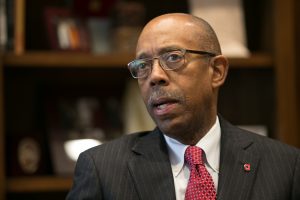 “Ohio State is a very special place. (My wife) Brenda and I are blessed to be part of the incredible Buckeye community,” Drake said in a press release. “The work being done at this university through teaching, learning, research, creative expression, community engagement and leading-edge partnerships is unprecedented in our 150-year history.

“Ohio State has enjoyed record successes in several of our most important strategic markers and has tremendous momentum. It was important to Brenda and me that the university be accelerating on a path forward as we decided to begin the transition.”

Drake, 69, has served the university in his current position since June 2014 but said the timing is right for him to step down at the end of the 2019-20 academic year. He will remain on Ohio State’s faculty following his retirement as president.

During his tenure, Drake — who also serves as chairman of the NCAA’s board of governors — introduced several programs to make college more affordable, including the first tuition freeze for in-state students in 40 years. The university has also raised $2.8 billion since his arrival.

“Our goal when we came to Columbus was to see The Ohio State University rise in impact and influence among the nation’s leading research universities, to significantly improve student and faculty success and recognition, and to contribute further to our community in a way that makes us the exemplars of the 21st-century land-grant university,” Drake said. “It is great to see that happening.”

On the other hand, Drake’s tenure has been mired in scandal.

Ohio State launched an investigation in 2018 regarding claims of sexual abuse made against former sports doctor Richard Strauss, who — according to the university’s findings — abused at least 177 male students between 1970-98. He died in 2005.

Later that year, former head football coach Urban Meyer was suspended for three games after the university found he failed to properly handle of allegations of domestic abuse against former wide receivers coach Zach Smith. The Buckeyes went 3-0 under current head coach Ryan Day in his absence, and Meyer retired following the Rose Bowl win to deal with health problems caused by a cyst in his brain.

“The university has never been stronger, and there couldn’t be a better time to position a new leader for success,” said board of trustees chairman Gary Heminger.