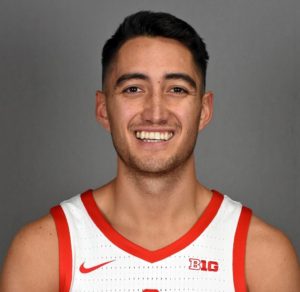 Abel Porter transferred to Ohio State from Utah State during the offseason, but he will not get the opportunity to take the court with the Buckeyes.

Porter, a graduate transfer point guard, has been ruled medically ineligible due to a “non-COVID related medical condition that will end his collegiate career,” according to a statement released Wednesday, Nov. 4.

“This has been a difficult past few weeks for Abel and his family,” Ohio State head coach Chris Holtmann said. “He is a tremendous person and I know he is very appreciative for the opportunity to be a Buckeye. Abel has expressed how thankful he is for the fantastic medical care he has received.  He will remain a part of our program.”

Porter announced his transfer to Ohio State on April 11, with the expectation that he would help with the team’s lack of guard depth. Beyond starting point guard C.J. Walker and combo guard Duane Washington Jr., the Buckeyes lacked primary ball handlers, where Porter was supposed to step up.

Last year with the Aggies, Porter averaged 5.6 points, 3.2 assists and 2.4 rebounds per game while shooting 38.2 percent from the field, starting all 34 games.

Porter, a former walk-on, earned a scholarship and a starting spot as a third-year sophomore for the Aggies, following a two-year mission trip.

Porter showed an ability to knock down three-pointers at Utah State, particularly during the 2018-19 campaign, when he hit 30 of his 74 attempts (40.5 percent) from deep. He started 55 of his 94 games overall with the program.

Holtmann had anticipated Porter providing much-needed depth in the Buckeye backcourt behind Walker and Washington Jr., so he will have to turn elsewhere with Porter ruled unable to play.

Justice Sueing, a 6-foot-7 wing transfer from Cal, is expected to take on ball-handling responsibilities, with the possibility of freshman wing Eugene Brown III or fourth-year junior wing Musa Jallow being forced to make plays in a pinch.

The lack of depth in the Ohio State backcourt could be aided by the potential approval of Jimmy Sotos’ transfer waiver for immediate eligibility. The Bucknell transfer’s initial waiver was denied, but the program appealed and awaits a final decision from the NCAA.

The Buckeyes and their thin backcourt will take on Memphis in Sioux Falls, S.D., to kick off the season on Nov. 25 as part of the inaugural Bad Boy Mowers Crossover Classic.