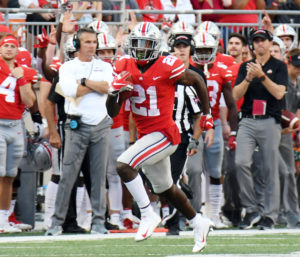 The group was led by sophomore quarterback Dwayne Haskins and senior right tackle Isaiah Prince, who each earned first-team nods from the coaches and the media alike. Fifth-year senior receiver Parris Campbell was voted as a first-team performer by the coaches while junior center Michael Jordan got a second-team nod from both sets of voters. Sophomore running back J.K. Dobbins was a second-team selection by the coaches and junior receiver K.J. Hill and fifth-year senior right guard Demetrius Knox earned third-team nods from the media.

Campbell was also a second-team honoree in the media vote.

Haskins, who was also named the Big Ten’s Offensive Player of the Year and Quarterback of the Year, set single-season Big Ten records for passing yards (4,081) and passing touchdowns (42) this year. The Potomac, Md., native has set most major single-season passing records in program history this year.

Prince, a team captain, has started every game at right tackle for the Buckeyes since the beginning of the 2016 season. The Greenbelt (Md.) Eleanor Roosevelt product was a third-team selection last year.

Campbell, in his second year as a team captain, leads the Buckeyes in receptions (72), receiving yards (903) and touchdowns (11). He ranks fourth in the Big Ten for receptions, fifth in receiving yards per game (75.3) and fourth in touchdowns scored. Campbell was a third-team (coaches) all-conference honoree as a returner in 2016 and as a receiver (coaches) in 2017 in addition to being a second-team returner last year (media).

Jordan is in his third year as a starter but first at center. The Canton (Mich.) Plymouth product was a first-team All-Big Ten selection by the coaches as a guard last season.

Dobbins leads the Buckeyes with 961 rushing yards and eight touchdowns on 206 carries, good for 80.1 yards per game (10th in the Big Ten). The La Grange, Texas, native was a second-team All-Big Ten honoree by the coaches and the media as a freshman in 2017.

Hill is second to Campbell in receptions (66) and receiving yards (823) this year while ranking in a tie for third on the team with six receiving touchdowns. Hill, from Little Rock, Ark., also serves as Ohio State’s primary punt returner.

Knox took over as a starter for the Nebraska game last season and kept that role at right guard through the Michigan game this year. He suffered a Lisfranc injury late in The Game, though, and is likely out for the year.

The No. 6 Buckeyes (11-1) are set to return to the field Saturday in Indianapolis for the Big Ten championship game against No. 21 Northwestern (8-4). Kickoff at Lucas Oil Stadium is set for 8 p.m. on FOX.