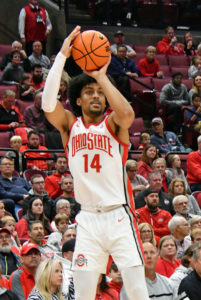 Ohio State could not keep pace with Illinois on Tuesday at the State Farm Center in Champaign, Ill., falling 69-60 for its sixth loss in its last seven games.

The Illini (14-6, 5-4 Big Ten) gashed the Buckeyes (11-9, 3-6) in the transition while outscoring Ohio State 16-1 in fastbreak situations. Illinois also dominated the boards, sparking several of their fastbreak opportunities with a 44-30 advantage on the glass, including 30 defensive rebounds.

Brice Sensabaugh and Sean McNeil combined to score Ohio State’s first 12 points and were the only two Buckeyes to hit a field goal during the game’s first 10:26. Ohio State hit just four of its first 16 shots, including a span of eight-straight misses, but Illinois couldn’t take full advantage and held just a 16-12 lead with 9:43 to play in the first half.

A three-pointer from Bruce Thornton and a jumper from Sensabaugh kept the Buckeyes within striking distance entering the under-8 timeout, trailing the Illini 19-17. However, Illinois ripped off a 13-4 run across the next 5:36 to open up a 32-21 lead — their largest of the first half — with forward Matthew Mayer capping off the stretch with a three-pointer with 2:28 remaining in the stanza.

Roddy Gayle Jr. stopped the bleeding with a three-pointer and Eugene Brown III added a layup to pull the Buckeyes within six, but Illinois guard Jayden Epps hit a pair of free throws with three seconds left in the half, allowing the Illini to take a 34-26 advantage into the locker room.

Ohio State shot just 10 of 32 (31.3 percent) during the opening frame while the Illini countered with a 45.5 percent mark from the field, despite shooting 3 of 13 from three in the stanza.

The Buckeyes cut the Illinois lead to seven after Thornton finished a three-point play to make it 38-31, but the Illini countered with a 10-0 run — coinciding with a 3:11 scoring drought from Ohio State — to pull ahead by 17 with 15:18 to play in regulation.

Justice Sueing and Zed Key combined to score 11 of Ohio State’s next 13 points, sparking a 13-4 run by the Buckeyes, to cut Illinois’ lead to 52-44 with 10:47 to play. However, Illinois expanded its lead to 64-48 with 6:17 left thanks to a pair of emphatic dunks in transition by forward Coleman Hawkins and guard Ty Rodgers.

Illinois closed out the game with ease while holding the Buckeyes to 36.7 percent (22 of 60) shooting, including a 4 of 10 mark from three. Sensabaugh was Ohio State’s leading scorer with 14 points on 5-of-13 shooting while Sueing added 13.

Terrance Shannon Jr. had a game-high 17 points for the Illini, hitting all nine of his free throw attempts, while adding seven rebounds and three assists. Epps and Mayer added 14 and 12, respectively.

Ohio State remains on the road for a trip to Assembly Hall to take on Indiana on Saturday at 8 p.m. The game will be televised on FOX.