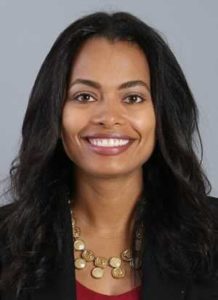 “I am both honored and humbled to be given the opportunity to serve one of the most storied programs in college athletics,” Gates said in the release. “The Ohio State University has an unwavering commitment to academic and athletic excellence. I would like to thank both (athletic director) Gene Smith and (senior deputy athletics director) Janine Oman for their support during this process and for the opportunity they have given me to join a wonderful team.”

“Additionally, Ohio State’s tradition of excellence on the football field is second to none, and having the chance to work directly with this championship football program will be, without question, an incredible opportunity to continue serving student-athletes and coaches at the highest level. My family and I are thrilled to join the Buckeye team.”

The Gates hire comes as a replacement for Diana Sabau, who was named Big Ten’s deputy commissioner and chief sports officer. When speaking to the media on a Monday Zoom call, Gates said she has had conversations with Sabau and that “she will be somebody I stay in contact with.”

Gates was at Boston College for four years, where she had direct oversight over the women’s basketball, women’s soccer and men’s and women’s golf programs. She also has spent four years at South Florida and four years at Duke after starting as a postgraduate intern in the diversity and inclusion department at the NCAA headquarters in Indianapolis.

“We are all excited to welcome Jocelyn to the sports administration team at Ohio State,” Oman said. “Jocelyn is a connector who excels at building relationships and is committed to providing our student athletes’ exceptional experiences. Her varied and impressive background in intercollegiate athletics will greatly benefit our team.”

Gates said in that Monday Zoom that, once the opportunity arose, it was something she couldn’t pass up.

“When you get a call from Ohio State, you don’t turn it down,” Gates said. “You run to it.”

She said she has not yet met with head coach Ryan Day, though the two had conversations through texts. Gates made it a point that she did not want to interfere much with the recruiting dead period just ending, and also said she has had a lot of respect for Ohio State’s program after Boston College stole former Buckeye co-defensive coordinator Jeff Hafley to become its head coach.