Ohio State Moves To No. 3 In College Football Playoff Rankings, Will Play Clemson In Playoff Semifinal 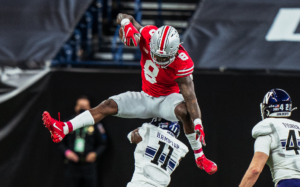 After staying at No. 4 in every iteration of the College Football Playoff rankings to this point, Ohio State jumped up one spot to No. 3 in the final rankings, getting placed over Notre Dame after its 34-10 loss to Clemson in the ACC Championship Game.

The Buckeyes also had to take care of business on their own end, defeating Northwestern 22-10 in the Big Ten title game. Ohio State now will face Clemson, who finished second in the rankings.

The Fighting Irish dropped to No. 4 and will play top-ranked Alabama in the other semifinal game.

The Buckeyes will face off against the Tigers for the third time in CFP history, and for the second time in as many years, on Jan. 1. Last time around, Clemson overcame a 16-0 deficit to defeat Ohio State 29-23, which was sealed on a late interception by Justin Fields due to a miscommunication with wide receiver Chris Olave.