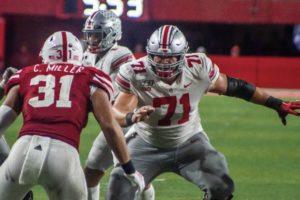 There’s no such thing as an elite offensive line with just one top performer, because the performance of the group up front is so dependent on chemistry. With that in mind, it would be unfair to single out one specifically player up front to spotlight, because each of them are equally crucial to the overall success of the line.

Through six games, Ohio State’s front five has passed every test in front of it with flying colors. It has allowed just 13 sacks, despite facing off with blitz-heavy teams like Cincinnati, Indiana and Michigan State. Even more impressively, the Buckeyes are fourth in the nation in rushing yards per attempt with 6.2, behind only Oklahoma, Louisiana and Georgia. Starting halfback J.K. Dobbins is a legitimate Heisman contender, racking up 826 yards and six scores on just 116 attempts, good for a whopping 7.1 yards per attempt.

All of this is impressive on its face, obviously, but it becomes even more impressive given where this group came from. Ohio State had to replace four starters from a group that struggled quite a bit last season. In doing so, the Buckeyes have improved their yards per attempt by almost two whole yards (4.3 in 2018), and yards per game by more than 100, from 177 in 2018 to 288.5 in 2019.

That isn’t supposed to happen with four new starters, even if one of those new faces isn’t necessarily new to college football in the form of Rutgers graduate transfer Jonah Jackson. Chemistry takes time, and when all five starters really haven’t played together before, the line isn’t supposed to be anywhere near as good as Ohio State’s has been through six games.

“When you look at what (Greg Studrawa) has done and (Kevin Wilson) and everybody on our staff and then when you look at what the guys are doing, taking ownership,” head coach Ryan Day said. “Josh and Wyatt, Jonah inside and then on the outside Thayer and Brandon and Josh, they’ve all taken a lot of pride in what they’re doing. We talked about being tough and running the ball and more important that was this year, and they’re embracing it.”

While the line does need to be viewed as a group, that doesn’t mean that individual accomplishments can’t be acknowledged, and each player has been uniquely excellent this season.

There may not be a more consistent left tackle in the country. Munford was very quietly good for Ohio State last season and has taken another step forward as a junior. He’s the best pass protector on the line, and has completely shut down every edge rusher Ohio State’s first six opponents have thrown at him. His most impressive showing was his most recent, when he neutralized Kenny Willekes, the Michigan State defensive end that has terrorized quarterbacks for essentially his entire career. Munford held Willekes to just one solo tackle, and kept him out of the backfield for the entire game.

Munford’s run blocking is certainly good, but he truly shines in the passing game, and that shows up in consistent clean pockets for Justin Fields.

It isn’t a passing play, but Munford’s block on this play is significant enough to return to, and emblematic of his style. He picks up the defensive end and drives him completely out of the play and all the way to the ground, opening up a massive hole for Dobbins to run through. He’s a mauler in every way, and his style is a crucial one for Ohio State’s line.

The most experienced member of the front five, Jackson has been as steadying a force as Munford has, and his leadership has been invaluable for a group that needed veteran voices entering the season. He’s struggled with penalties at times, including a bad holding call against Michigan State that brought back a massive Dobbins run, but Jackson has been a pretty massive net positive for the Buckeyes through six games.

His greatest quality so far has been his overall balance. He isn’t great at either pass or run protection, but he’s very good at both, and can be trusted to handle both on any given play. Ohio State is comfortable running behind him, but it’s also perfectly fine pulling him on outside runs, and leaning on him against very good interior rushers in pass protection. Jackson probably isn’t a future first round pick like a few of his line mates, but that doesn’t make him any less valuable.

Jackson uses his versatility and athletic ability to get down field, and makes a massive block to spring Dobbins for a huge run. He doesn’t always make the highlight play and seems to be content as a piece rather than the featured player,  but when he hits, he hits as hard as anybody.

Pound-for-pound, Josh Myers is the best player on the offensive line. That comes as a massive shock, given that this is his first year as a starter, but the junior from Miamisburg has been almost perfect out of the center spot this season. He’s excellent in pass protection, even better when he gets to clear holes for the run, and he’s missed on maybe two snaps all season long. Ohio State couldn’t possibly ask for a better performance so far from the new center.

What has been so impressive so far about Myers, above all else, is his athletic ability. Like everyone else on this line, Myers is obviously an enormously strong and physical blocker, but his agility getting down field for second level blocks makes him extremely dangerous when Ohio State frees him up to block down the field on the ground. For good reason, the Buckeyes do it frequently. Myers is usually the first lineman asked to get to the second level and when he gets to square up a linebacker he does not miss.

Myers did just that here, getting to the linebackers quickly and decimating Michigan State’s Joe Bachie to spring Dobbins for a 67-yard touchdown run.

Davis is the least consistent of the group, missing the occasional block, but that’s likely a result of his highlight friendly approach. Nobody on the line hits harder than Davis, or makes more big plays, but he has a bit of a tendency to go all in to make those big plays. Because of the consistency around him, Davis able to make those plays.

Davis, like Myers, is at his best down the field, though he usually does it off of a pull rather than a down block. Davis excels at flying off the edge and paving the way for Dobbins or Master Teague, be it sealing off the defensive end or picking up a linebacker (or two, sometimes).

The plays only goes for two yards, but Wyatt Davis showed off his highlight-ability here, kicking outside, stopping on a dime, and blowing Bachie up to clear a cutback lane for Dobbins. Dobbins couldn’t take the lane in time, but Davis got the chance to flex his enormous talent and strength.

Bowen is the least flashy player on the line, but like Munford and Jackson on the other side, his consistency and leadership is invaluable for the Buckeyes. Returning from the injuries he’s suffered is impressive enough, but the fact that he can still play at a high level and bring with him five years of experience is enormous for the Buckeye front.

He isn’t the best run or pass blocker on the line, but Saturday’s matchup with Michigan State showed just how crucial he is to the offense. Ohio State had no answers on the right side of the line when Bowen wasn’t out there, and it completely crippled the offense. When he came into the game, even without being 100%, the dynamic completely changed. He keeps Fields upright on the blindside, clears room for Dobbins, and does it every single, and pretty much every single play. He’s a glue guy rather than a star, but that’s exactly what the line needs him to be.

This is the quintessential Bowen play. He doesn’t do anything splashy or crazy, doesn’t blow up a defender, doesn’t go all out to make a play. Instead, he makes the smart, calculated block, and completely shuts down his assignment. This is exactly what Ohio State needs at the backside tackle spot.