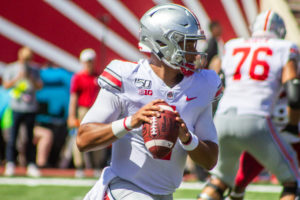 It’s weird to think back to a time where there was debate on whether Justin Fields would be able to live up to the potential.

Looking all the way back to the Spring Game, Fields’ first opportunity in front of the Ohio State fan base, the sophomore quarterback completed only four of his 13 passes — albeit one was a 99-yard bomb to Binjimen Victor — and was sacked four times.

If there’s one thing to remember moving forward, it’s this: The Spring Game means less than nothing.

Six games into his first campaign as a starter, and Fields is now firmly in Heisman contention, compiling 18 passing and eight rushing touchdowns, good for No. 4 and No. 7 in the NCAA.

The 26 total touchdowns responsible for is the most of any player in college football.

His yardage totals aren’t as flashy as the ones his predecessor, Dwayne Haskins, put up, with Fields completing 98 of 141 passes for 1,298 yards and rushing 57 times for 283 yards. But the sophomore quarterback has been incredibly efficient and has the No. 5 passer efficiency rating (187.5) in the NCAA to show for it.

He has impressed any potential doubters he may have had heading into the season, as well as head coach Ryan Day.

“I think Justin can make a throw anywhere on the field, at any point whether it’s in the pocket or when he goes to escape. There’s not really an area of the field he can’t get the ball to. And a lot of times it’s not even with his feet under him. He can get away with some of that stuff,” Day said. “All the things that we’re cleaning up in terms of technique and getting the ball out in time, but he’s very talented.”

The schedule is only getting harder, but Michigan State was no slouch, and Fields barely took a step back, throwing for 206 yards, rushing for 61 and finding the end zone three times (2 pass, 1 rush) overall, though he did throw the first collegiate interception of his career.

An 18-to-1 ratio is still plenty to write home about, and through six games, the Ohio State offense has been firing on all cylinders, much in thanks to how Fields has played at the helm.

His head coach thinks he can still get better from here.

There may be more important ones, but none proved the spark that Fields can bring more than one of the first plays he ever made in an Ohio State uniform.

Two minutes into the game against Florida Atlantic, Fields made a read and decided to tuck the ball and run, and, with help from the offensive line, he exploded through the gap and used his speed to score the first touchdown of Ohio State’s season from 51 yards out.

This was the play that showed what the Georgia transfer was going to bring, and is the one that made everyone forget anything that resembled concern from that glorified practice in April.

Justin Fields strikes from 51 yards out, and Ohio State is on the board first. 7-0 pic.twitter.com/T0IIoDgmdK