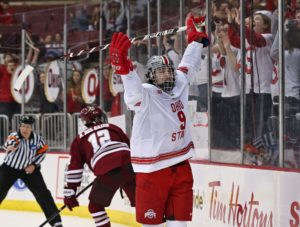 After a disappointing end to the 2018-19 campaign with a first round exit in the NCAA Tournament, Ohio State starts the upcoming season with more to prove.

A year after being ranked No. 1 before playing a game, the Buckeyes head into the 2019-20 season ranked No. 12 in the USCHO preseason poll.

The position makes Ohio State the second-highest ranked team in the Big Ten, trailing Notre Dame, who is ranked ninth.

Right behind at No. 13 is Penn State, with Wisconsin at No. 16 rounding out the teams in the conference to make the top 20.

Minnesota finished at No. 21, getting the most votes (142) of any team that did not make the rankings.

Ohio State was ranked the No. 2 team in the country following two wins against Wisconsin on Feb. 8 and 9, wins that brought the Buckeyes’ win streak up to seven games. The team then proceeded to go 1-6-1 in its final eight games, winning the Big Ten regular season title, but falling to Penn State 5-1 in the Big Ten Tournament, and then 2-0 to Denver in the NCAA Tournament.

The Buckeyes open their regular season on Oct. 11 against No. 14 Western Michigan. The two-game series will take place in Toledo as part of the Ice Breaker Tournament.