Ohio State Men’s Basketball Stays At No. 4 In AP Poll 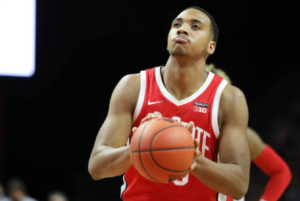 Ohio State remained at No. 4 in the Associated Press top 25 poll following a pair of victories over Maryland and Indiana, trailing only Gonzaga, Baylor and Michigan, who remained at No. 1, 2 and 3, respectively.

With the two wins this past week, the Buckeyes now sit at 17-4 overall and 11-4 in the Big Ten. They have also won six straight games, with their last loss coming on Jan. 19 against Purdue.

Ohio State will have its chance to move up another spot in the polls with its matchups this week, starting with a Thursday night road game against Penn State, followed by a Sunday home matchup with the No. 3 Wolverines, who are 14-1 on the season.

Elsewhere in the Big Ten, Illinois moved up one spot to No. 5, giving the conference three teams in the top five. Iowa moved up four spots to No. 11 and Wisconsin stayed put at No. 21 to make it five Big Ten teams in the top 25.