Ohio State Men’s Basketball Jumps To No. 4, Women’s Drops To No. 12 In AP Poll 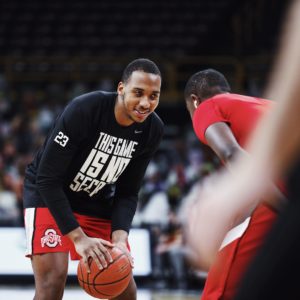 Following an 89-85 win on the road over Iowa, the Ohio State men’s basketball team continues to climb in the Associated Press top 25 poll, moving up three spots to No. 4 in the rankings.

The Buckeyes, who are 15-4 and have won their past four games, sit behind only Gonzaga, Baylor and Michigan in the poll.

After falling by four to Ohio State, the Hawkeyes also dropped a game against Indiana, to make it four losses in the past five contests. As a result, Iowa fell seven spots in the poll to No. 15.

Other teams ranked from the Big Ten include Illinois at No. 6, Wisconsin at No. 21, Purdue at No. 24 and Rutgers at No. 25. The Boilermakers and Scarlet Knights were new entries into the poll. Minnesota also received 12 votes.

The full men’s rankings can be found here.

The women’s basketball team fell one spot to No. 12 in the AP poll after a 2-1 week that included a loss to Northwestern and victories over Iowa and Minnesota.

Ohio State, who is now 12-2 on the season, fell into a tie with Michigan, who rose a spot into 12th place. The Wildcats, who handed the Buckeyes their second loss of the season, jumped one placement to No. 21.

The full women’s rankings can be found here.