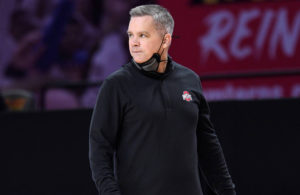 Ohio State men’s basketball head coach was one of 15 coaches to be named to the Werner Ladder Naismith Trophy Men’s Coach of the Year award after leading the Buckeyes to an 18-4 record and the No. 3 ranking in the Associated Press top 25 poll.

Holtmann is joined on the list by just one other Big Ten coach, Juwan Howard, who has led Michigan to a 15-1 record, and who the Buckeyes are facing off against at 1 p.m. Sunday.

Also joining Holtmann, but on the women’s basketball side, is Ohio State head coach Kevin McGuff, who was one of 15 women’s basketball coaches to make the late season watch list. Michigan, Ohio State and West Virginia are the only three schools to have coaches on both men’s and women’s lists.