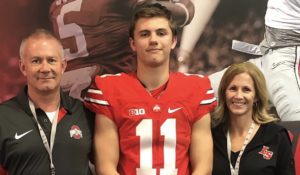 Ohio State kicker commit Jake Seibert has accepted an invitation to play in the Polynesian Bowl on January 18, 2020.

Excited to be named as a specialist to compete at the @polynesiabowl in Hawaii!! Thank you @Chris_Sailer and @FBUcamp for giving me the opportunity!! @GameWinnerKick pic.twitter.com/gAK7NwB8dx

The 6-1, 190-pound Seibert, who hails from Cincinnati La Salle, is considered the top-rated kicker in the country according to Chris Sailer Kicking. He committed to the Buckeyes in early June over offers from Air Force, Michigan State, Pennsylvania, Temple and UCLA.

Unlike the All-American Bow and Under Armour All-America Game, each player participating in the Polynesian Bowl receivers travel accommodations, lodging and meals. Roughly 75 percent of those selected are of Polynesian ancestry and already live on the island or on neighboring islands, however.