Ohio State-Illinois At Risk Due To COVID Cases 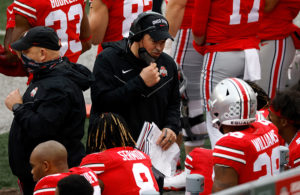 According to Dave Biddle of Bucknuts, Ohio State’s Nov. 28 matchup with Illinois is at risk of cancelation after “some OSU players tested positive” for COVID-19 in the week leading up to the matchup.

Eleven Warriors’ Dan Hope confirmed that report, and shared that the positive test numbers is expected to be in the single-digits, which may not be enough to force a cancellation. However, if the team test positivity rate jumps above 5 percent and its population positivity rate went above 7.5 percent, the program would forced to pause all activities, though that’s not yet happened in Columbus.

Those restrictions have impacted multiple Big Ten games this season, including two bouts for Wisconsin earlier in the year and Ohio State’s Nov. 14 game against Maryland, which was canceled due to positive tests within the Maryland program.

Any players that test positive are required to sit out for 21 days, which would take any Buckeyes testing positive through this weekend (if there is a game played), Dec. 5 against Michigan State and Dec. 12 against Michigan and eligible to return for the Big Ten Champions Week on Dec. 19.

However, if Ohio State misses more than one game as a result of this, it likely won’t be headed to the Big Ten championship game during Champions Week, because there’s a six-games-played minimum to participate.