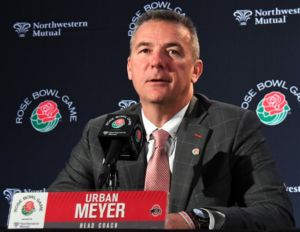 Third-year sophomore quarterback Dwayne Haskins passed for three touchdowns in what might be his swan song to give Urban Meyer in what was his final game a squeamish 28-23 victory for No. 6 Ohio State over No. 9 Washington in the 105th edition of the Rose Bowl in Pasadena, Calif., on Tuesday.

The Buckeyes (13-1) were cruising to 28-3 a lead midway through the third quarter but the offense disappeared, and they punted their final five full possessions.

UW (10-4) scored three touchdowns in the fourth quarter and the game was not sealed until fifth-year senior receiver Johnnie Dixon recovered an onside kick at the UW 49 with 42 seconds left and the Buckeyes ran out the clock.

His favorite target was fifth-year senior Parris Campbell, who had 11 receptions for 71 yards and a TD and now owns the OSU mark for most catches in a season with 90.

Junior Mike Weber, who has declared for the NFL draft, rushed for 96 yards 15 carries in his last game. Sophomore J.K. Dobbins added 24 yards on seven rushes with a score.

Washington quarterback Jake Browning had a brilliant fourth quarter to overshadow a poor first 45 minutes and finished 35 for 54 for 313 yards.

Andre Baccellia had 12 catches for 109 yards and running back Myles Gaskin had 121 yards and two TDs on 24 totes plus he threw a 2-yard TD pass.

The Buckeyes improved to 8-7 in the Rose Bowl while the Huskies fell to 6-8-1 in Meyer’s final game following the announcement of his retirement last month.

After OSU and Washington, in that order, had three-and-outs to start the game, the Buckeyes went 77 yards in 11 plays, chewing up 2:45, for a 7-0 lead on a 12-yard pass on second down to senior Parris Campbell for the 7-0 lead.

Make no mistake, it was Weber’s drive. His first four carries of the game went for 52 yards, including a 19-yard jaunt to the 12 on fourth-and-1 from the UW 31. He also had runs of 9, 14 and 10 yards. Sophomore Demario McCall contributed a 9-yard run just before Weber’s long gainer.

Washington finally got untracked on its next possession and used a 15-yard catch by Jordan Chin and an 11-yard run by Gaskin among the plays that allowed the Huskies to penetrate to the OSU 23, but false start and holding penalties pushed them back to the 38.

Ohio State increased the lead to 14-3 at 12:23 of the second quarter with Haskins finding Dixon for a 19-yard scoring strike.

The 75-yard, 10-play, 3:56 series got off to an inauspicious start with a false start penalty. Weber got 2 back before Haskins found fifth-year senior Terry McLaurin for a 32-yard gain to the Washington 46. Weber gained 10 yards on a 2-yard run and a catch for 8 to end the first quarter.

Later, facing third-and-3 from the UW 29, Dixon had an 8-yard grab to keep the drive alive. Weber ran for 3 and Dobbins had a catch for 4 but a false start on senior right tackle Isaiah Prince pushed the Buckeyes back to the 19. That was only a slight detour as Haskins connected with Dixon a yard into the end zone on the next play.

Late in the second quarter, sophomore Drue Chrisman punted 30 yards to the Washington 8 with 1:21 left. The Huskies used all of 21 seconds and the Buckeyes did not have to spend a timeout to get the ball back before scoring a critical TD before the break.

Baccellia picked up 5 with a catch but Browning threw incompletions on the ensuing two plays and the punt by Joel Whitford of 44 yards gave OSU a chance with 1:00 left and 57 yards to pay dirt.

A pass interference against the Huskies on a ball intended for Victor resulted in a first down at the 13. Haskins scrambled for 3 yards then hit sophomore tight end Luke Farrell for 9 to the 1. OSU took a timeout with 18 seconds remaining.

Haskins made it 21-3 with a 1-yard toss to junior tight end Rashod Berry with 14 seconds to go at the end of a five-play, 57-yard march in 46 seconds.

The Huskies got the ball to open the second half and had a solid series going but after getting to the OSU 32 a sack by junior defensive end Jashon Cornell (7 yards) and a 4-yard rushing loss by Salvon Ahmed pushed them back to the 43 and Washington punted into the end zone.

Washington closed to within 28-10 on a possession that started in the third quarter and ended early in the fourth when Gaskin took the snap and made a jump pass of 2 yards to Drew Sample on fourth down with 12:17 left in the game.

Four plays later a holding call on sophomore safety Brendon White put the ball on the OSU 21. Gaskin and Baccellia had catches for a combined 16 yards help set up the scoring play.

After an Ohio punt that went 16 yards after being partially blocked to the UW 34, Washington need only five plays to go 66 yards, using 1:30.

OSU made one first down but had to punt and the Huskies started from their own 15 with 4:57 left. On third down, White tackled Gaskin for a 5-yard loss to bring fourth-and-8 and the Huskies punted 36 yards to the OSU 47 with 3:49 left.

The Buckeyes punted a fifth straight time and UW began from its 29 with 2:50. Pass interference on White put the Huskies at their 47. A great leaping catch by Bryant on third down moved the ball to the OSU 36. Hunter had a 3-yard reception and Salvon Ahmed another for 9 to the 24 and a first down.

Fuller’s catch moved the chains to the 11 and Ty Jones had a catch for 7 yards to the 4. A pass interference on sophomore quarterback Jeffrey Okudah placed the ball on the 2 and Gaskin ran to the right pylon to make it 28-23 with 42 seconds left following a review to see if he had indeed scored.

Browning’s pass for the two-point conversion was intercepted in the end zone by White and he returned it to the OSU 45 before being tackled.

After the onside kick, Haskins took two knees and the season and Meyer’s career were over.